The Millennial Theatre Company is presenting Andrew Lloyd Webber’s rock opera “Jesus Christ Superstar,” the story of the last week of Jesus’ life told from the perspective of Judas. It will be performed at the Crestview Performing Arts Center on July 27 and 28 at 7 p.m., July 29 at 3 p.m., Aug. 3 and 4 at 7 p.m. and Aug. 5 at 3 p.m.

Joe Asente, director, said The Millennial Theatre Company was founded in 2016 due to a lack of space in the area for theater performances.

He said that since then, they have collaborated with Kent, The DeYor Center, The Rust Belt Theater Company and Hopewell Theatre to put on millennial produced and performed shows in the Mahoning Valley.

Asente said The Millennial Theatre Company chose “Jesus Christ Superstar” because the show has not been performed in the area for a long time. 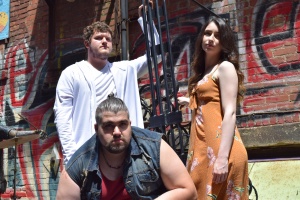 He said he also noticed an increase of interest in the show on social media through NBC’s “Jesus Christ Superstar Live Concert,” starring John Legend.

“A lot of people in The Millennial Theatre Company age range found interest in ‘Jesus Christ Superstar’ with the NBC version, so it was a logical fit,” Asente said.

He said the leading roles are being performed by returning faces from past shows; however, many cast members are alumni of Crestview High School, where there is a strong theater community all coming together for one last show together.

Asente said he hopes the audience is entertained by the show and can see what millenials are capable of.

“The show is something everyone can relate to, and if you are a Christian it is a story you believe in brought to life,” he said.

Asente said the technical elements were the most challenging part of the show, but looking at the show come together was the most rewarding for him.

The show includes fog machines, moving lights and other special effects to transform the traditional theater into a rock venue.

Jacob Nash, who plays Jesus, said “Jesus Christ Superstar” was a good fit for The Millenial Theatre Company because it is a show that can appeal to any audience, regardless of religious beliefs.

Nash said he has been given a lot of creative freedom to portray Jesus in his own way, but there still is pressure tied to playing Jesus.

“The role of Jesus in this production is very iconic and has been sung by some of the greatest rock singers of all time, and filling the shoes of the ones who came before me is definitely something that has been challenging,” he said. “I think that I’ve been able to put the pressure aside for the most part and make the role my own.”

Josh Fleming, who plays Judas, said The Millennial Theatre Company shows are unique to the area because everyone involved is in the same age range, making a strong chemistry. 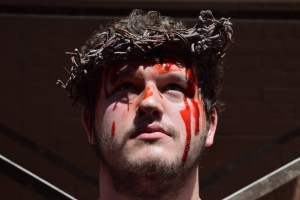 “Judas betrays Christ. How does one approach such a man? Well the best villains, if you’d call Judas that, see what they’re doing as just,” he said. “This story humanizes Judas in such a way that, for me, makes it easy to understand where he’s coming from.”

Fleming said he wants the audience to leave the theater with hope.

“Whether you’re religious or not, this is a beautiful story that has something for everyone,” he said. “How would you feel if someone put the weight of the world on your shoulders? How would you react? It makes you question a lot about your beliefs and I hope everyone will leave moved.”