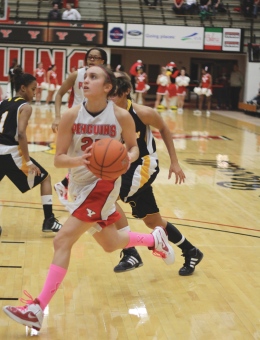 “Yeah, I’ve been waiting all year for this, ever since March ended last year and I found out we were playing Pitt first,” Hornberger said. “They have a huge venue, and it’s really exciting to start the season off again.”

The Youngstown State University women’s basketball team opens its season on Friday at 11 a.m. against the Panthers.

Head women’s basketball coach Bob Boldon said he knows that opening up on the road against a Big East opponent will not be easy, though he is excited for the opportunity.

“We’re going to have our hands full this weekend,” Boldon said. “But it’s exciting to get to go play at a place like that and get to play a Big East team on the road and see what you can do with it.”

The Penguins, who finished with a 10-20 overall record and went 4-14 in the Horizon League conference last season, are optimistic about improving those numbers this season.

“I think every one of our returners are better players, and I think we’ve added some valuable depth,” Boldon said.

YSU has six returning letter winners, three returning starters and nine newcomers. But with so many newcomers, it may take the Penguins some time to become acquainted.

“It’s kind of hard to let the mistakes come and go because you want to be perfect every day,” Hornberger said. “But I think our newcomers have really caught on pretty fast.”

Boldon admitted that his team isn’t the most gifted, but said he feels the players can overcome their deficiencies.

“We’re not very tall, we’re not very fast and we’re not incredibly athletic, which isn’t a good combination,” he said. “But we try to overcome that by working together and working hard.”

The Penguins were picked to finish eighth in the Horizon League in the preseason poll. Unconcerned with the rankings, Boldon just wants his team to take steps in the right direction.

YSU’s schedule is a difficult one, as the Penguins will face three Big East opponents and have nine games against teams that won at least 20 games last season.

For the tough road ahead, the Penguins are hoping that senior Brandi Brown can help YSU along the way.

Brown, who averaged 15.9 points and 9.3 rebounds last year, was named to the preseason All-Horizon League First-Team.

“I think she’s good enough to be one of the best players in our conference, and that’s her challenge — to be consistently good night after night,” Boldon said.

To complement Brown, the Penguins will surround her with an array of shooters.

“We’ve got the best group of shooters we’ve ever had here from top to bottom, and hopefully they can make some shots,” Boldon said.

With those feelings, consider YSU a team ready to start the season.

“I think everybody’s probably excited this time of year, and we’re no exception,” he said. “The kids are ready to play.”