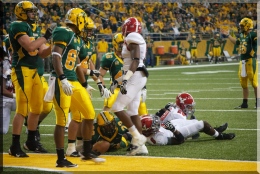 Bison fullback Andrew Bonnet (46) is upended while leading the way to a North Dakota State University touchdown in the second quarter of NDSU’s 48-7 victory against the Penguins. Photo by Steve Wilaj/The Jambar.

Then again, he was practicing what he preached only minutes before at his postgame press conference.

Wolford added that the game could be used as a “lesson” to the Penguins.

“Mostly everything I saw today is correctable, and that’s the encouraging thing,” he said.

Although Wolford took a positive approach in the aftermath, it was a negative day for YSU, who dropped to 4-1 on the season.

The matchup that pitted No. 1-ranked NDSU against the No. 3-ranked Penguins was anticipated to be a closely contested game. However, it was anything but.

With the Bison (5-0) dominating in all phases of the game, Wolford narrowed the losing factors down to two aspects.

“We said at the beginning of the week that the game was going to come down to turnovers and the ability to convert on third down,” he said. “We obviously didn’t do well in either area.”

YSU committed three turnovers — two interceptions and a fumble — while NDSU didn’t commit any for the 11th straight game. On third down conversions, the Bison were 11 of 15, whereas the Penguins converted only three of 10 tries.

“We can’t self-inflict,” Wolford said. “We let this game get out of control very early on because of self-inflicted turnovers.”

On the first play from scrimmage, YSU running back Jamaine Cook fumbled the ball, which was recovered by NDSU, setting up its first touchdown.

Later in the second quarter, with YSU trailing 14-7, a pass by quarterback Kurt Hess was intercepted by Bison All-American defensive back Marcus Williams and returned 98 yards for a touchdown.

The Williams’ touchdown, which erupted the all-time, record-breaking crowd of 19,065 fans inside the Fargodome, was the turning point of the game for NDSU, said head football coach Craig Bohl. “Very rarely do you win a game when you have a pick-six against you,” he said. “For a quarterback, that’s hard to overcome.”

Hess’ interceptions were his first two of the season.

“It’s unexpected, but those things happen,” Wolford said of Hess’ struggles. “I think they did a good job upfront of harassing our quarterback. Their defensive line made it difficult.”

Bohl said the Penguins’ struggles were partly a result of the rowdy NDSU crowd.