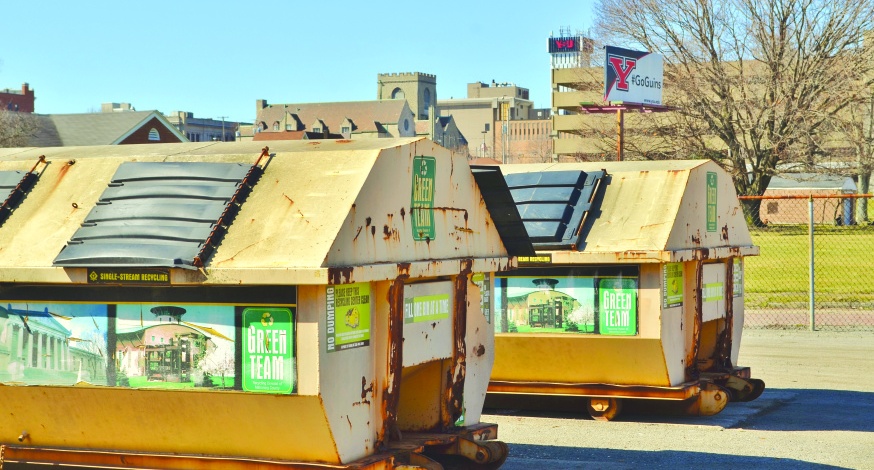 To promote environmental sustainability on campus, the Youngstown State University Recycling Program, Student Government Association and Geography Club are collaborating to educate students about recycling. They are coordinating this initiative with Recyclemania, a competition the University participates in each spring.

The competition includes 400 colleges across North America who report the amount of recycling and trash collected each week. Universities are ranked based on who recycles the most on a per capita basis. Each week, students can check the scoreboard on the Recyclemania website to see how they stack up against other schools.

Dan Kuzma, manager of the YSU recycling program, reports the amount of recyclable and reusable materials on campus diverted from landfills. YSU is currently in 19th place with a 59.5 percent recycle rate.

“Adding a little friendly competition will hopefully increase it,” Kuzma said. “Since we already have the recycling programs on campus, it’s really easy. Pass up the trash bin and put something in the recycling bin.”

Jayne Catlos, a member of SGA’s student life committee, reached out to Kuzma and ended up recruiting Geography Club to participate.

“[Kuzma] told me about Recyclemania, which is something that is done every year, but student groups don’t get involved,” Catlos said. “I brought this back to my committee … and said we need to get some student groups [involved].”

She said to further their agenda of creating an environmentally sustainable campus; SGA will be getting involved as well.

“We’ll be sending students out on campus, like a little environmentalist army I guess, to encourage good habits,” Catlos said.

James MacGregor, SGA vice president for student life, said they will have a green table in Kilcawley on the 24th, which will serve as an educational booth.

“[We] hope to make students realize that they can recycle things they often throw away like empty pizza boxes,” MacGregor said. “This is what we want to promote, a general awareness. You can recycle most things.”

Catlos said they also want to educate students on how to recycle properly. Throwing a bottle with liquid in it into a recycling bin contaminates the entire bag and everything has to be thrown away. 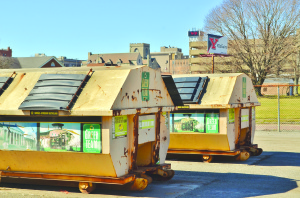 Kuzma has taken a creative approach to promotion, starting a campaign called “Get Caught Green Handed.” If Kuzma sees someone recycling or doing something environmentally friendly, such as using a reusable water bottle, he surprises them with a five-dollar bill or a coupon donated from local eateries.

“My idea is that as one person I might not be able to reach all 13,000 students on campus,” Kuzma said. “But through word of mouth … if you surprise somebody they’ll make mention of it, especially through social media.”

Getting involved with Recyclemania, educating students about recycling and participating in Get Caught Green Handed is the first step for SGA. The next step is to hold a drive for students to recycle things on campus that aren’t paper or plastic, perhaps batteries or old notebooks.

“During finals week, we want to say, ‘Here, we don’t care if you have stacks of paper. We’ll take it,’” MacGregor said.

“She’s [Orr] been doing this for a long time, but now we want to give it a title,” MacGregor said.

Kuzma said he tries to make Recyclemania more fun and exciting every year, and the support of student organizations expands the scope of what we can accomplish.

MacGregor said he hopes the initiative will leave a lasting impression on campus.

“SGA is focusing on … showing that we encompass every aspect of what it takes to have a successful college career and keeping the campus environment friendly,” MacGregor said. “We hope to push this, and that future SGA bodies keep it going.”