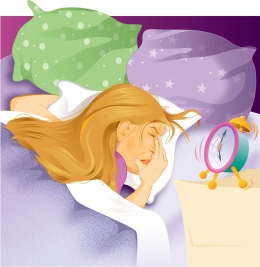 Gary Brode, a senior studying telecommunications at Youngstown State University, stays organized in order to get a good night’s sleep.

“The biggest problem I think most college kids have is that they don’t plan their schedule properly,” he said. “I’m typically able to get seven to eight hours of sleep a night because I usually plan out my week in advance. However, sometimes there is nothing you can do about it.”

According to a study done by the Centers for Disease Control and Prevention, those who report insufficient sleep are more likely to participate in health-risk behaviors including drinking alcohol, smoking cigarettes, using marijuana and being sexually active.

The CDC estimates that 50 to 70 million U.S. adults have chronic sleep and wakefulness disorders. The percentage of people who report fewer than seven hours of sleep on average per night has increased since the 1980s to approximately one-third of all U.S. adults.

Lack of sleep not only causes difficulty in concentration the next day, but has other consequences as well. People experiencing sleep insufficiency are more likely to have chronic diseases such as diabetes, depression and obesity.

Among the reasons for these changes in sleeping patterns are increased working hours, all-nighters to finish a paper or cram for an exam, and TV at bedtime.

Tawni McClendon, a senior studying criminal justice, said her busy schedule makes it hard to get enough sleep every day.

“Going to school and working is like having two full-time jobs,” she said. “By the time I get off work, go to class, run errands and finish my homework, it’s just enough time to catch a few hours [of] sleep and get up to do it all over again.”

The National Health and Nutrition Examination Survey found that respondents who reported at least some college education (34.5 percent) had a lower prevalence of short sleep duration than persons with only a high school diploma.

According to the CDC, those who need to improve their sleep quality should keep a regular sleep schedule; avoid vigorously exercising within two hours of bedtime and going to bed on a full or empty stomach; limit caffeine, nicotine and alcohol in the evening; and sleep in a dark, quiet, well-ventilated space with a comfortable temperature.

In addition, the American Academy of Sleep Medicine recommends taking some time to “wind down” before going to bed. For instance, get away from the computer, turn off the TV and the cellphone, and relax quietly for 15 to 30 minutes prior to bedtime.

Editor’s Note: Gary Brode is a former assistant online editor of The Jambar.