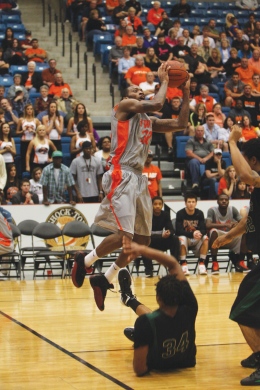 Kamren Belin shoots a jump shot during a game as a Cowley College student-athlete. Along with Bobby Hain and Ryan Weber, Belin will join the YSU men’s basketball team next season. Photo courtesy of Cowley College Sports Information.

With the addition of 6-foot-7-inch Kamren Belin, 6-foot-9-inch Bobby Hain and 6-foot-7-inch Ryan Weber, the Penguins have added plenty of height.

“We are very excited about our incoming recruiting class of Kamren, Bobby and Ryan,” Slocum said. “All three are exceptional people and players, and will help us immediately.”

Hain and Weber signed their National Letter of Intent to join YSU on Nov. 9. Slocum said he is excited because of each player’s scoring abilities.

“The thing I like about both of these guys is they really can score the ball,” Slocum said. “We are really pleased to have two quality people and highly talented basketball players join our program.”

Hain, a forward, averaged 18.3 points and 9.2 rebounds per game for Jupiter High School in Florida during his senior season.

He said he brings an inside scoring presence as well as the ability to score from the perimeter.

“I can shoot the ball and stretch the defense,” Hain said. “But I can also post up and play down on the block.”

“[He’s] very agile and shoots the ball extremely well,” Slocum said. “Bobby has such unlimited potential, and, as he gets stronger, he can turn into an outstanding basketball player.”

Joining a team that is coming off an improved 16-15 season in 2011-2012, Hain said he has high expectations for the Penguins.

“I know they want me to come in and play right away,” Hain said. “I met with the whole team, and I loved all the players. It is an overall great fit for me.”

Similarly, Weber said he believes YSU is an excellent fit.

Weber, who played for Roncalli High School in Indiana, averaged 14.8 points and 4.3 rebounds per game during his senior season. He described his game as “versatile.”

“I have a big body, but I have skills that can be used on the perimeter,” Weber said. “I also bring an overall hustle and grittiness.”

Slocum said he thinks Weber, like Hain, has tremendous potential.

“Ryan is an overall very good basketball player,” Slocum said. “He guards well and shoots the ball extremely well. … Ryan is what is good about college athletics.”

Weber added that he is excited to join Slocum and the men’s basketball team.

“[Slocum’s] really smart and knows what he’s talking about. I think he’s a great coach,” Weber said. “And the team — it’s like a family. Everybody gets along with everybody.”

Belin, another new member of the family, will join the Penguins after playing two years for Cowley College in Kansas. He signed his National Letter of Intent on April 11.

“We are very excited to have Kamren join our program,” Slocum said. “He has the ability to make shots from the perimeter and is a solid offensive player in the post and a great rebounder.”

Last season, Belin averaged 12.0 points and 7.8 rebounds per game for the Cowley Tigers. He described himself as having an all-around game, shooting 46 percent from the floor and 49 percent from beyond the 3-point line. Belin also blocked 1.8 shots per game.

“My shot is pretty good, and I’ll rebound and play defense,” he said.

As for choosing YSU, Belin said the situation “felt right.”

“When I got on campus and started playing, I clicked with the guys,” he said.

“That’s to win championships,” he said. “I’m looking forward to playing with the guys.”