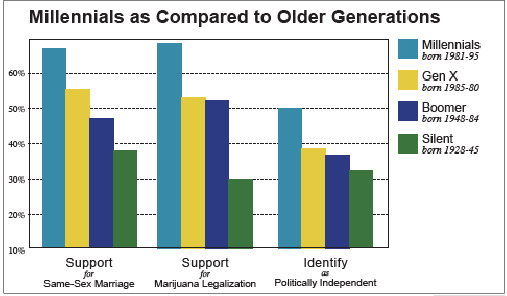 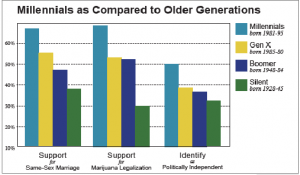 The Pew Research Center, an organization that gathers and studies data on different social and demographic trends, has published data on the Millennial Generation — a population that includes traditional college students.

With the majority of Millennials having now reached adulthood, their political and social tendencies can impact the ever-evolving structure of America. Research suggests that — compared to other generations — Millennials are more likely to marry later than prior generations, and support same-sex marriage and marijuana legalization.

“Now people can’t really get by with just graduating high school and starting a family. They need to further their education in order to make enough money to support a family. It’s harder if you don’t have an education,” Spencer said.

Jena Bushong, also a traditional YSU student, said the support for the issue is evident among her peers.

“There is a huge shift in support for same-sex marriage in our generation. I feel that there’s a large push for that,” Bushong said.

Another issue that has drawn much attention recently is the legalization of marijuana.

YSU student Elizabeth Urig cites the double standard that currently exists in society that allows other substances such as alcohol and cigarettes to be legal but not marijuana.

While not personally in favor of drug use, Urig believes the decision to use should be the right of the user.

“My opinion is it’s your body, it’s your life. If you want to do that stuff, that should be your own choice rather than the government’s,” Urig said.

Despite their general trend toward acceptance and freedom, Millennials are actually far less trusting as a generation.

Spencer points to the culture in which Millennials were brought up in as children, specifically to the now common adage “stranger danger.”

“It’s the way we were raised, to think that strangers are bad people, and you should only trust people that you know,” Spencer said.

Urig considers this finding to be a bad trend for the Millennial Generation.

“I truly think we need to go back to the rose-tinted glasses, where everybody is considered trustworthy. You truly do think the best of people, an innocent until proven guilty kind of standpoint as opposed to this ‘you need to earn my trust” mentality,’” Urig said.

Half of Millennials now describe themselves as political independents compared to 39 percent of Generation X, 37 percent of Baby Boomers and 32 percent of the Silent Generation.

“I think it’s really good. There’s really no black and white when it comes to politics. It’s really not as clear-cut as ‘Hey, I identify with democrats; I’m going to vote all democrat on issues.’ Being independent really allows you to pick and choose how you want to be voting,” Urig said.

Overall, Millennials have already separated themselves from their elders pretty significantly in terms of politics and social trends.

“Seeing [this data] in terms of statistics, in terms of acceptance of various issues, is really eye-opening. I guess I didn’t realize how much of a gap there is between our viewpoints and our parents’ and grandparents,’” Bushong said.