The Youngstown State University Penguins did not face the Football Championship Subdivision National Title Game alone. They headed to the game in Frisco, Texas, with the cheerleaders, majorettes, flag line and the Marching Pride YSU band.

After spending all of Jan. 4 rehearsing for the performance, the group departed on Jan. 5 at 4 a.m. on Campbell school charter busses. They arrived on Friday morning around 3 a.m. 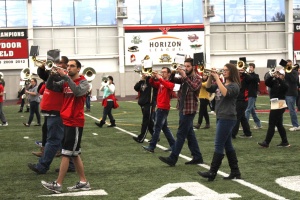 The group spent Friday rehearsing and checking out the logistics at the stadium, said Michael Barkett, a senior studying music performance.

Barkett said the game was a chance for YSU to come together and support the team.

“A historical thing for our university is happening this week, and it’s a privilege to be down here supporting the guys that have been working nonstop to get us here,” Barkett said.

The band held a three-hour rehearsal on Wednesday afternoon before they left campus. Brandt Payne, director of athletic bands, said the bitter cold in Youngstown presented some challenges during the rehearsal.

The marching band performed their traditional pre-game show and a highlight from their halftime show last season.

Payne said the band was excited to meet the other team’s band members.

“We are eager to meet our new friends from James Madison University and share pre-game and halftime performances,” Payne said.

Cheerleader Christchianna Goldner said the cheerleaders prepared for the game by trying to involve the community in supporting the team and practicing as much as possible. The cheerleaders were busy, with the basketball and football seasons overlapping.

“Between getting ready for the championship and still cheering for our other athletic teams, our schedule has been very hectic, so we practiced as much as we could,” Goldner said. “We made sure to help involve the community in supporting the team.”

Goldner, a sophomore studying criminal justice, said all 17 squad members were able to attend the game. Despite the loss, Goldner remained positive about the experience.

“We are upset that we could not bring home that National Champion title, but we have high hopes that we will make it back next year and show them what we are really made of,” Goldner said.

The trip and participating in the game has been an amazing experience, Goldner said.

“It shows that Youngstown is not to be messed with,” she said. “I am blessed to have been a part of this, and it is amazing that we are now another part of YSU history.”

Payne said on the way home, there was a lot of sleeping on the busses. He also remained positive about the experience.

“Win or lose, we are always happy and proud to play for the Penguins, YSU and Youngstown,” Payne said.