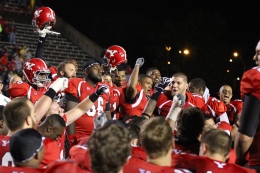 Youngstown State University players celebrate on the field after a 42-35 victory against University of Northern Iowa on Saturday at Stambaugh Stadium. Photo by Dustin Livesay/The Jambar.

Time after time, big play after big play, quarterback Kurt Hess seemed out of options and the Penguins seemed destined for its first loss Saturday against the University of Iowa.

The final Hess magic-act came with 1:50 left in the fourth and the game tied. The junior quarterback dropped-back, scanned the field, and with the rush surrounding him, fired a touchdown strike to Christian Bryan for a 42-35 Penguin victory.

“One of the things we do as an offense is not give-up,” Hess said. “Some things may not work all the time but we just keep trying…We stayed together and made a play there.”

The drama in YSU’s first victory over UNI since 2000 didn’t end there though. On the Penguins 12-yard line with five seconds remaining, Panthers quarterback Sawyer Kollmorgen threw to the end zone. Although the pass was incomplete, a flag was thrown.

“At first I thought they called it against us,” defensive back Donald D’Alesio said. “Then I replayed the play through my head and they picked our corner. Then I heard what the ref said and we were all excited.”

While the hearts of the YSU fans stopped on that final play, the Penguins (4-0) lived on the edge the entire second half.

Falling behind 28-21 after a pair of David Johnson touchdowns, YSU answered immediately. On fourth and two on UNI’s 43-yard line, the Penguins were aggressive as usual. A play-action fake allowed Hess to find a wide-open Will Shaw, who rumbled in for a 43-yard score.

However, on the ensuing YSU drive, Wolford—sticking to his aggressive nature—elected to go on fourth down, this time at the Panthers 29. The risk paid-off again, as Hess connected with Shaw on a 26-yard pass, setting up a Torrian Pace 1-yard TD run.

“The fourth down situation and some of the third and shorts, you have to let it all hang out,” head coach Eric Wolford said. “We’re gonna go for it. Sometimes people think you’re gonna go for just a two or three yard play. You have to show them you’re willing to pitch it out there to the endzone.”

And although the Penguins defense was shaky all game, they were able to force a three-and-out to set up the final dramatics.

“It was crazy and it was exciting for us,” Hess said. “We’re gonna enjoy it.”