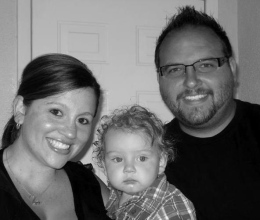 A local pastor and Youngstown State University graduate is getting down to the basics of Christianity with the Project 614 worship experience, and he’s not picky about who joins him.

“We don’t care what you wear, what you look like or what your past is. We have one goal: showing the grace of God to others,” pastor Jared Woodward said.

Project 614 is a movement focused on people ages 18 to 39. The objective, Woodward said, is to help people who may be disconnected from any religious background find God.

“The church, for far too long, has been a place where we nurture, help grow and invest in to people up until high school graduation, and then sort of forget about them until they are adults,” Woodward said. “This is not only sad but true for most churches.”

In September, Woodward and a launch team started Project 614 as a daughter of Churchill United Methodist Church, located off Belmont Avenue.

The Protestant service is held once a month and has reached 72 people. Woodward said the organization is in the process of launching weekly services, which he expects will start in August.

“We’re working out of that small group, and what we’re really focusing on is inviting people,” Woodward said. “People say it usually takes about a year to launch, but we’re trying to get it done earlier.”

David Gilbert, senior pastor of Churchill United Methodist Church, said he had some help finding the right person for the job.

“It wasn’t our decision to pick Jared,” Gilbert said. “God led him to us. We’ve been praying for him to come along for three years.”

“I knew it would be different, that it wouldn’t be my parents’ church, that it was something I could take ownership of,” Lord said.

“The church is all about offering grace, never turning away people or preaching hate, just offering grace to anyone who comes in the door. It’s different in the fact that it’s directed for a certain age, and that’s it.”

Woodward described his services as a laid-back, come-as-you-are atmosphere. He refuses to be called “pastor” and commonly gets referred to by his first name.

A nontraditional Christian band plays rock and punk music, and most people wear jeans and T-shirts.

“Our goal is to not make it feel like a church because church has so many things that go along with it, and that’s what we want to get away from,” Woodward said.

The organization’s website, http://www.project614.org, states, “We are not religious, but relational.”

“We even meet at a Mexican restaurant after the service to get to know people,” he said.

Woodward and his wife, who is heavily involved in the organization, are each 24 years old and use that to connect with the target demographic.

“We’re the ages of these people, so we both understand how people feel,” Woodward said. “We were in college, we know how stressful it is. It’s not like I’m a 40-year-old that’s disconnected trying to guide these 20-year-olds.”

Gilbert, 59, said that in his generation, at least half of his peers grew up in the church. With regards to the current generation, however, Gilbert said he would be surprised if 20 percent of people attend.

He said Woodward is reinventing the church to match the current generation.

“My feeling is that the church, the way it is, it’s almost impossible to speak to people of a younger age,” Gilbert said. “I think people are drawn to spirituality, they just don’t see the benefit of the church as it is now.”

“Jared has showed time and time again that his message can relate to anybody,” he said. “We’re a mission-minded church, so we do whatever to help people.”

Among the lessons that Project 614 sets out to teach to area adolescents and young adults, some are more important than others.

“We really want to focus on grace. There’s a lot of guilt that people have to deal with, and that’s not what God wants for us,” Woodward said. “We are not just another church; we are a relentless movement to show God’s grace.”

Lord said he thinks everyone will be affected by this new project.

“I think 614 is going to have a huge impact on not only adolescents but on anyone who walks in the door,” he said.

Woodward said he feels that he is taking small steps to a much bigger objective.

“I’m not going to change anybody. God changes people,” he said.