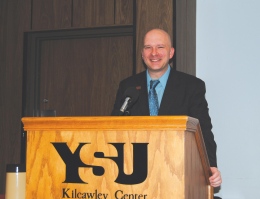 Gary Daniels, associate director of the ACLU of Ohio, spoke on Tuesday in Kilcawley Center’s Ohio Room about the future of gay rights. Photo by Chad Travers/The Jambar.

Originally a Youngstown resident, Daniels served as the Ohio ACLU’s litigation coordinator for several years before becoming the organization’s associate director and head of the Columbus regional office.

He holds a seat on the board of the Ohio Center for Law-Related Education and has been a board member of the Northeast Ohio Coalition for the Homeless.

Daniels spoke to students on the topic of gay, lesbian, bisexual and transgender rights, both in Ohio and at the national level.

His lecture focused on the state of GLBT rights today and where he and his organization believe the issue is heading.

Daniels said he believes that it is the older, more conservative generation that is relatively less accepting of gay rights.

Thirty states currently have constitutional amendments against gay marriage, and in 2012, six more states are putting the issue on November’s ballot. Only six states have legislation that permits gay marriage.

Daniels said he feels that progress is being made, though.

The emergence of gay/straight-alliance groups and LGBT support organizations points to a society that is slowly becoming more accepting.

“The GLBT movement is still young,” Daniels said. “There hasn’t really been a GLBT movement for very long — at least not a successful, vocal, visible one.”

Daniels said he sees the visibility of gays and lesbians in popular culture as a contributing force in driving the movement forward.

“It was a big deal when Ellen [DeGeneres] came out of the closet on her TV show. There was so much ink spent writing about that particular incident, but look where we are now. Is it a big deal to have a gay or lesbian character in the cast of a sitcom? No, I think it’s actually more of a big deal to not have a gay character on a TV show,” Daniels said.

Daniels’ most important advice is to “guard against complacency,” and he urges people to contact their local legislators about gay rights issues.

“It’s easy to become complacent, even for people inside the movement. Maybe they find themselves in a position where they’re comfortable and feel accepted. It’s easy to forget that there are a lot of people out there who aren’t in that position,” Daniels said.

YSU’s gay-straight alliance, YSUnity, cooperated with Youngstown Area PFLAG, an organization for parents and friends of lesbians and gays, to host Daniels’ lecture.

“I’m so glad to be working with Youngstown Area PFLAG and the Unitarian Church. We’re very happy to be co-sponsoring Mr. Daniels’ lecture,” said Ken Holt, president of YSUnity.

Marguerite Felice, president of Youngstown Area PFLAG, said she is pleased with the progress her organization has made in publicizing gay and lesbian issues.

“We have monthly support meetings, and we’re working with local school districts to promote safe schools for our kids,” Felice said.

The Welcoming Congregation of the First Unitarian Universalist Church of Youngstown, a volunteer organization within the Unitarian church that seeks to provide a welcoming and inclusive environment for people of all sexual orientations, was also involved in bringing Daniels to campus.

To become recognized as a Welcoming Congregation, a Unitarian church goes through a lengthy process of training and education to ensure a safe space for people of any sexual orientation.

Senior Molly Toth is a member of the First Unitarian Universalist Church of Youngstown.

“We go through workshops and education before we can be considered a Welcoming Congregation. It took about three years before we were recognized. It’s nice because so many other religions want nothing to do with these issues. We’re an open and accepting congregation,” Toth said.