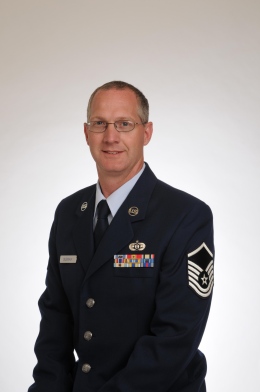 Iraq is dusty, desolate, hot, humid and, above all, sandy. That’s how David Olekshuk remembers it.

In 2008, nearly 20 years after joining the United States Air Force Reserves, David Olekshuk finally got the call to serve.

He shipped off to Iraq for six months, working on emergency management.

Every day he responded to two or three calls about chemical spills, gunfire or mortar attacks.

David Olekshuk worked 12-hour shifts and slept in a barrack above the office. He said it was more like working 24 hours a day, his downtime regularly broken up by emergency after emergency.

“The first attack that we got, everything puckered up on you; let’s put it that way,” he said, adding that responding to attacks didn’t become easier as time passed.

But he got used to it.

Within his first few weeks of returning home, a loud sound would put him on edge. A bang still causes him to perk up.

The soldiers knew they were there for a reason, though, David Olekshuk said. Their only complaint was the heat, but they had a job to do, and they did it.

The soldiers he worked with became his family away from home. For six straight months, they played Wii Golf and watched movies nightly, worked together, shared a barrack and played practical jokes on one another.

“We got along great,” he said. “We had to. We didn’t have a choice. You’re with them 24 hours a day [and] seven days a week for six months. And you get to become a family.”

They still keep in touch today with weekly emails or calls, even though they’re scattered around the country.

David Olekshuk, a Youngstown State University graduate, has been a network services technician at YSU for 12 years. He is also interim coordinator of the Office of Veterans Affairs.

David Olekshuk said YSU is a great supporter of the military and that he’s never been given a hard time.

Jim Olive, program manager for the Office of Veterans Affairs, has been working with David Olekshuk at YSU for about 10 years.

“I found him to be just a great guy who can’t sit still,” Olive said. He added that David Olekshuk is a great worker, a family man and “a great guy to have on your side.”

David Olekshuk didn’t join the reserves until he was 28. He left for six months of training the day after Christmas in 1991.

He left his wife, Diana Olekshuk, behind during basic training in Lackland, Texas.

During his deployment, however, he also said goodbye to his teenage daughter, Ashley Olekshuk.

He communicated with his family through daily emails and frequent phone calls, but he was still missed.

David Olekshuk recalled his daughter crying the day he left, but his wife held it together until his return.

“We emailed, and then he had limited time on the phone, but I missed him a lot,” Ashley Olekshuk said.

His wife said hearing about the first couple of attacks was unbearable. She was trying to stay strong for her daughter, but eventually had to ask that David Olekshuk keep the dangerous side of his deployment to himself.

David Olekshuk said his family, neighbors and co-workers would frequently call to check in and offer help to his wife.

“Whether people supported the war, you support the family,” Diana Olekshuk said. She added that their friends and family were exceptionally supportive.

When David Olekshuk neared the end of his service, he and his wife planned a surprise for their daughter.

He surprised her by showing up in uniform at the high school football game where she was cheerleading. His presence was announced over the speakers, and he greeted her on the field.

“I was at our cheerleading game, and he came out on the track and surprised me,” Ashley Olekshuk said. “I was so excited to see him.”

In the reserves, soldiers are required to complete the training of full-time soldiers in a single weekend every month, along with two extra weeks in the summer.

David Olekshuk has visited more than 10 countries for training since joining the Air Force.

“It’s an experience being in the military,” he said. “You get to see a lot of the world.”

David Olekshuk said he joined the reserves out of patriotism and thankfulness for the freedoms Americans have.

He said leaving his family while he served was difficult, but it was his duty.