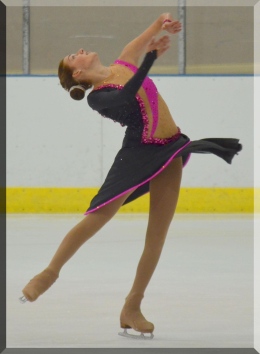 Ariana Zebrasky began figure skating as a way to stay occupied while her brother played hockey.

“I got into skating when I was about 4,” she said. “My brother used to play hockey, so my parents made me try ice skating to keep me busy while he had practice.”

Now, at 19 years old, figure skating plays a slightly larger role in her life. On Wednesday, Ariana Zebrasky, a chemical engineering major at Youngstown State University, will travel to Colorado Springs, Colo., to compete in the figure skating nationals. She will contend for the Senior Ladies Free Dance title at the tournament, which will run through Sunday. But the best part, she said, is that she will be joined by her coach and brother, Thomas Zebrasky.

“It makes me so happy that I am going to Colorado, not only with him by my side as my brother, but also my coach,” she said. “I am just glad that he will be there with me to share this awesome experience.”

Thomas Zebrasky agreed that the brother-sister connection makes the journey even more special.

“It’s not like it’s just any other student,” he said. “We work at the gym. We work off-nights. We work at home. We watch video together.

Competition to competition, I critique her on her videos. … It’s hard to explain, but it’s just the fun of working with my sister.”

The Zebraskys are not unfamiliar with the big stage. Thomas Zebrasky qualified for the national ice dance tournament in 2009.

“To see my sister qualify and kind of follow in my footsteps,” he said, “it’s just a great achievement for her.”

Although the Zebraskys make the task look easy, the achievement is quite rare. Out of more than 8 million registered figure skaters, less than 240 in all four regions of the U.S. make the cut to compete at nationals. Even more impressive, Ariana Zebrasky placed first out of the top six qualifiers from the Midwest region.

“It is such a great feeling to not only be selected, but to go to nationals as first in your section,” she said.

Ariana Zebrasky clinched her national spot at the final Midwest regional competition in Indianapolis earlier this month. At first, her accomplishment was one that “she could not believe.”

“It took some time until it really hit me that I was actually going,” she said.

“I don’t really know what to expect in Colorado, but knowing that I am first for my section makes me pretty excited and ready to go.”

Having competed nationally before, Thomas Zebrasky said he will give his sister some tips.

“What I’ve learned through my experience is that it all builds,” he said.

“Things get harder; you learn more. I think I try to take all the things over the years that I learned and teach her to try to take it step by step like I did.”

Ariana Zebrasky, a resident of Poland, will represent the Youngstown Phantoms Figure Skating Club from the Ice Zone in Boardman. The club, she said, is “like a family” to her, since she has put endless hours into her sport.

“I got to the point I am in by training every day and just putting everything I got into this sport,” she said.

Though she admits figure skating is time-consuming, Ariana Zebrasky added it is something she will always be involved with.

“After nationals, I am still going to compete and hopefully qualify again next year,” she said. “But once I cannot compete anymore, I am going to coach and continue with the sport.”

It has been 15 years since Ariana Zebrasky was forced into figure skating during her brother’s hockey practice, and Thomas Zebrasky said he just wants his sister to enjoy the moment.

“She’s working hard for herself, and it’s just a great achievement for her, regardless of whether she comes home with a U.S. title,” he said.