John Hyden’s promotion as the associate vice president of facilities maintenance at Youngstown State University was ratified by the Board of Trustees at their meeting on June 6.

Hyden, who has worked at the university for almost 25 years, was the executive director of facilities until he was promoted to his new position in January.

He said he found his way back to Youngstown after working with large construction companies and living in places such as Pittsburgh, Atlanta and Washington D.C. for 15 years.

He said his responsibilities have expanded, and he has picked up the rest of facilities maintenance throughout the years including parking services, motor pool, environmental and occupational health and safety and university support services. 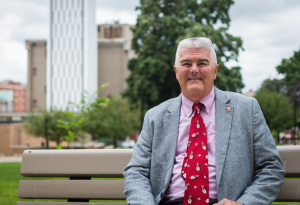 Hyden also said there are a lot of things that are not typically facilities-related that he deals with today.

“[My job title] is just a little bit more fitting with where my responsibilities have gone … I’ve got a lot more interaction now with the city and the various city departments,” Hyden said.

“Most of our maintenance guys start sometime between 6:30 and 7:30 [in the morning], so it’s good to be here to support them, too,” he said.

Neal McNally, the vice president of finance business operations at YSU, said it is important that Hyden’s job carries a heavier title and it is well-deserved.

McNally said Hyden does not necessarily work a nine-to-five job and must always be ready for situations that may occur on campus.

“This is a big job, a rather demanding job. It requires John to always be on call,” McNally said.

This was found to be true when The Jambar staff contacted Hyden after five o’clock and he answered the phone.

McNally said the salary that corresponds with Hyden’s new job title represents the fine job that he has done.

Danny O’Connell, director of support services at YSU, has worked with Hyden for 10 years. He said one of Hyden’s best attributes is that he lets people do their job without micromanaging.

“I think that that’s a wonderful form of leadership … I don’t know of anyone here that puts more time in than John Hyden. I can call him 24/7,” O’Connell said.

Hyden said he believes that Youngstown and YSU are good places to be.

“It’s a great place to get an education … There are an awful lot of faculty and staff that have a real interest in the mission,” he said.