The 15th annual Walk to End Alzheimer’s took place on Saturday at the Watson and Tressel Center.

Over 700 people showed up to last year’s walk and more than 400 preregistered prior to the event this year according to Helen Paes, the Alzheimer’s walk coordinator.

In the U.S., 5.5 million Americans suffer from Alzheimer’s Disease. One in 10 people over the age of 65 have Alzheimer’s, according to the Texas Health and Human Services website.

“If someone is forgetful about personal history, that’s where it starts. People whose personality changes, maybe they’re not as socially active as they once were. It’s a change in answering questions and knowing what things are used for and problems with judgement,” Paes said.

People at the walk who made a $100 donation received a free purple t-shirt with the caption, “Walk to End Alzheimer’s.”

Paes said the Alzheimer’s walk is the largest across the country in nearly 600 communities to raise funds for care, support, research and increase public awareness of this disease. 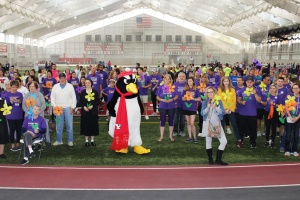 There was a lot going on inside the training center before the walk began, Paes said.

Activities included Zumba, a kid zone, team pictures and many other events.

People were able to walk, check out local health organizations and listen to a disc jockey play music before the opening ceremony began.

The event began with an opening ceremony and remarks from Paes.

The crowd held up their pinwheels and honored loved ones lost to this disease.

Tammie Cooper, a YSU student, volunteered at the event and supported the cause.

“It’s a need. I know people who had Alzheimer’s and how it affected them. It’s a sad disease. My aging and society class professor asked if I wanted to volunteer, and that’s how I got involved,” Cooper said.

Kathy Chambers attended the event because her own mother passed away from Alzheimer’s.

“I don’t think people realize how much it affects family. People don’t know who the person really is,” Chambers said.

Chambers said the event has improved awareness for the community about the disease itself and the affect it has on the caregiver and family.

The group of people lined up and held their flower pinwheels as a YSU student carried a purple flag and led the march around the training center for one lap before they embarked on their two-mile walk across campus and around downtown.

Paes promised the crowd that they will not let Alzheimer’s defeat them and that a cure is inevitable.

“Together we’re moving toward our goal to raise funds and awareness. We’re moving toward a cure. One day we’ll end this disease. Let’s show the world our passion and purple. Alzheimer’s isn’t going to back down and neither are we,” Paes said.