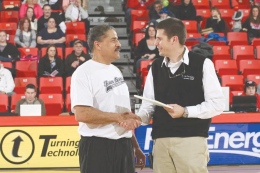 Anthony Spano, a parking services attendant and an alumnus of Youngstown State University, has been nominated for the HandsOn Volunteer Network Award.

Spano’s nomination recognizes his efforts to raise money for chronically and terminally ill children through the Hope Foundation of the Mahoning Valley.

Spano began helping those in need as a member of YSU’s chapter of the Phi Kappa Tau fraternity, which worked with a Hole in the Wall Gang Camp for children with serious illnesses.

Inspired by this work, Spano started the Hope Foundation in 2007. He now runs annual fundraisers and disseminates grants to programs that serve seriously ill children.

“I thought it would be a good idea to raise money for a good cause,” Spano said.

The Hope Foundation is entirely nonprofit, and all of its members serve on a volunteer basis.

Greg Gulas, Spano’s mentor during college, still volunteers with Spano and nominated him for the award.

“I’ve had a chance to watch him be passionate about student activities, our Greek system as a member of Phi Kappa Tau and now with his foundation,” Gulas said. “In my eyes, there’s nobody more passionate about YSU and the Mahoning Valley.”

This fall, the foundation awarded $3,000 in grant money; it was divided among the Youngstown Hearing and Speech Center, the Help Hotline Crisis Center, the Ursuline Center and the Brett Wilcox Foundation, Spano said.

“We, as an organization, deal with the funds and the projects to help kids,” he said.

Through fundraisers, Spano has been working to grow the amount that the foundation can give each year.

The foundation’s most recent fundraiser was the annual Bocce for Hope event, held at the MVR.

Spano said the event usually raises around $2,000, as does Wine for Hope, another annual event.

In addition, Spano has a new event in the works for December: the Hope Classic High School Basketball Showcase.

“You just do the best you can to the best of your ability with what you have,” he said.

The HandsOn Volunteer Network Award Celebration is planned for Nov. 8 at Avalon Golf and Country Club in Vienna. Tickets are $30 per person; they can be purchased by calling 330-782-5877.

“[The award is] just a way to bring light to the work that volunteers do, and it’s also a way to show people how easy it is to volunteer,” said Maureen Drummond, executive director of the HandsOn Volunteer Network of the Valley.