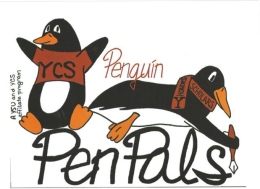 The above logo will appear on Penguin Pen Pals shirts. Logo courtesy of Heather Miller.

Honors students at Youngstown State University will dust off their crayons this week as the Penguin Pen Pals program begins.

Penguin Pen Pals is a program that links fourth graders in the Warren City School District to college students in the honors program at YSU.

Every Friday, the elementary school students will write to their YSU student in their journals and tell their pen pals about everything that is going in the classroom and in their lives. A social is planned for January.

“They can have someone who they can look up to and communicate their thoughts with,” she said.

Cossentino said students are encouraged to share portfolios with their pen pals.

“They can share artwork or tests that they may have gotten a good grade on,” Cossentino said. “They will basically communicate thoughts with one another.”

The program has been in the making for the past few months. Freshman Ashley Orr was one of the students who helped drive the program. She said she was involved in a similar program during her years at Columbiana High School.

“We have over 65 honors students who are interested in the program, which means every kid will have a pen pal,” Orr said. “We hope this program has a lasting volunteer opportunity for students.”

As for the future, Orr would love to expand to different elementary schools and possibly younger grades as well.

“If we get enough kids, then that can definitely happen,” Orr said. “We had an overwhelming response this year, so maybe next year we can expand more.” Eric Shehadi, a sophomore who is involved with Penguin Pen Pals, said the program benefits both the elementary school students and the college students.

“We want to give them a goal they can work toward, such as going to college,” Shehadi said. “It can also help give the college student a different perspective of a child with a different atmosphere than they had in school.”