Honors College Director Amy Cossentino said she was contacted in 2012 by the Youngstown Board of Education at the request of Dr. Rashid Abdu, a Youngstown surgeon who tutors at Harding Elementary, to start a pen pal program similar to Ohio State University’s program.

Cossentino said several members of the Youngstown Board of Education knew that honors students have a volunteer requirement and thought honors students would be interested in spearheading the project.

Cossentino said the first group of pen pals began in the fall of 2012, and the program has grown with more than 500 student volunteers. 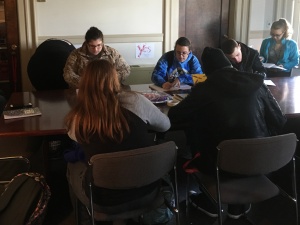 “We had a lot of interest from our students with several wanting to engage in the leadership,” Cossentino said.

Pen Pal co-coordinator Hannah Crites said the mission of Honors Pen Pals is to provide elementary school students and honors students with a chance to communicate, to learn from and inspire one another.

Crites said honors students will act as positive role models to the students and hopefully leave a lasting impression on their pen pal.

“This program gives elementary students an opportunity to develop writing skills while gaining another perspective in their lives,” Crites said. “Also, this is a way YSU can give back to the community.”

Crites said the students get excited when their journal is returned, and they cannot wait to read what their pen pal has written.

“They also become excited to share thoughts and ideas, encouraging reading and writing skills in a different way and in some cases the journals provide positive reinforcement of someone listening to them,” Crites said.

Mellicent Costarella, a pen pal participant, said she first got involved with Honors Pen Pals during her freshmen year of college.

“It is an amazing experience connecting with students and getting to know about them and their different experiences growing up,” Costarella said. “Writing and communicating with a different age group grants you a new perspective in life.”

Costarella said she finds Honors Pen Pals as a rewarding way to volunteer and help the community of Youngstown.

Starting this semester, a new writing program called Writing with Residents will begin.

It will involve Honors Students writing to residents in nursing homes in the surrounding area.

“Before my great grandmother passed away, I spent a lot of time in the nursing home visiting her,” Wensel said. “Some of my great-grandmother’s friends even told her how lucky she was to have a regular visitor.”

Wensel said looking back on the time she had spent there, she realized a lot of elderly people did not have family or friends to socialize with from outside of the nursing home.

Wensel said 140 people have signed up for the program that will involve sending the residents letters.

“Though the majority of the program is letter writing, there is also an option for students to visit if they have time in their schedules,” Wensel said. “YSU Honors College students will be writing biweekly for the rest of the semester to their residents.”

Wensel said when the idea was presented to her, she jumped and took charge.

“I think the idea of special people who have lots of stories and wisdom to share being lonely just kills me inside. The hope that this program will genuinely help residents who feel even slightly lonely has inspired me,” Wensel said.