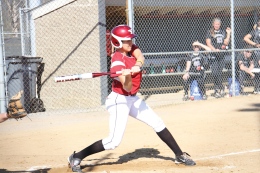 Junior Sarah Gabel attempts to rock a pitch during a game at home this season. The Penguins return home on Saturday, where they are 9-1. Photo by Dustin Livesay/The Jambar.

Even after winning five of its first six Horizon League games at home and sitting in second place, the Youngstown State University softball team struggled on the road in a nine-game stretch against conference opponents.

The Penguins dropped the first six games against Loyola University Chicago and Valparaiso University. The Penguins were outscored, 49-19, during the stretch.

“I don’t think we really strung our runs together,” said Caroline Krombach, junior outfielder. “That was mostly the big problem. We had some solid hits and everything. I just think we couldn’t pull it through.”

Sophomore Sarah Ingalls, first baseman, said the Penguins put runners on base, but couldn’t drive them in.

“I don’t think it’s the number one problem, but clutch hitting does make the runs more,” Ingalls said. “I believe in the team, and that’s what we’re working on.”

Krombach said it was more than just runs and clutch hitting. It was the emotional and mental aspects, especially against Valpo on Saturday.

The Penguins led, 11-0, before the Crusaders batted, but Valpo scored 13 of the next 14 runs to steal the victory.

“I think the emotional aspect is one of the more important things,” Krombach said. “I think that if we can keep our attitude up, we’ll be great. That was one of the downfalls this past weekend.”

Freshman Kayla Haslett, pitcher and infielder, said the team must pick up the opposing pitchers’ styles.

“I think we can improve by adjusting better to the pitchers that come up with different speeds and the way that they pitch,” Haslett said.

Haslett started three of the first six games and lost all three, dropping to 5-5 on the season. Overall, she pitched nine innings, allowed 19 hits, 16 runs (15 earned) and 10 walks.

The Penguins won 9-0 and 10-1 in a doubleheader against the University of Detroit Mercy on Wednesday. They will face the Titans in the finale on Thursday before heading home.

“It’s nice … to get on the road and bond — come together as a team — but it will be nice to have a little [home] stretch,” said YSU head softball coach Brian Campbell.

Ingalls said she is also happy to return home, and that the team feels more comfortable on its grass.

“We’re used to the fields and the bounces,” Ingalls said. “Playing at home, I think we’ll have the confidence back that we left there. We love playing at home, so we’re excited to be back, but we still got to get business done at Detroit.”

Before the recent road skid, the Penguins were 21-9-1 and 9-1 at home. To help snap their recent skid, Ingalls said the Penguins must attack early and often.

“If we get it on the board in the first couple of innings, we have the game,” Ingalls said.

Although the Penguins went from second to a tie for sixth place in six games, Campbell said they are not far off the pace.

They are one game behind third place, three games out of second and seven games behind first-place Valpo, who is 12-0 in conference play.

“In reality, we’re really only one game out of that third spot,” Campbell said.

The Penguins will face Wright State University in a doubleheader at McCune Park on Saturday and Sunday.