Youngstown State University women’s bowling coach Chelsea Gilliam came to YSU in 2015 to create the first team at the university. Although recognized for facing teams at the bowling alley, Gilliam is also facing an ongoing battle with breast cancer.

The chances of women getting breast cancer at age 20 is one in 1,681 compared to women at age 30 with a one in 232 chance, according to the American Cancer Society.

Gilliam said she discovered she had cancer in 2013 at 23 years old and it came as a shock when the ultrasound detected something.

She said they wanted to do a biopsy. She submitted one later that week and found out a week later she had breast cancer. 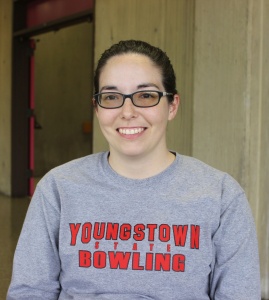 Her initial reaction to the news was a mixture of things, Gilliam said. She was shocked and upset and said nobody ever wants to hear that, let alone hearing it so young.

“After that I was like, ‘We caught it early, we’re going to take care of it [and] beat it,’ and I just did what I needed to do,” Gilliam said.

Gilliam beat breast cancer in November 2013 and was re-diagnosed in May 2016. She was experiencing hip pain and had surgery done on her femur in June.

“I found out the cancer had spread to my femur bone, so now it’s currently stage four, which they have to give it a number to sense it. It’s moved from its original location,” Gilliam said. “I’m taking hormone therapy to try and stop it from growing and spreading more.”

Mackenzie Olesky, YSU bowling player, said Gilliam is a fighter who is not going to stop.

“She promised to keep fighting for us and the team and we’re going to continue to support and fight right alongside her until we beat this together,” Olesky said.

Gilliam said being a coach has helped her to stay strong and get through her battle.

Rachel Darrow, YSU student on the bowling team, said Gilliam is a very down to earth coach and one of the strongest people she knows.

“No matter what she is going through or how she feels that day, she always comes to practice or a tournament with a smile on her face and is ready to face the day,” Darrow said.

Gilliam said spreading breast cancer awareness is very important. She advised young women who notice something different or wrong to go to the doctor and get it checked out. She said it’s better to hear the news early than to wait and find out when nothing can be done.

“I hate being in the situation but I feel that I can use it to help spread the word. I always tell people if a young girl reads my story and it ends up saving her life, then I feel like I did my job,” Gilliam said.

One thought on “Heroic YSU Bowling Coach’s Battle with Cancer”