During the 1960s and 1970s racial segregation was just beginning to diminish. On Sunday Herman Boone recalled the racial tensions he experienced as a high school football coach in Alexandria, Va. 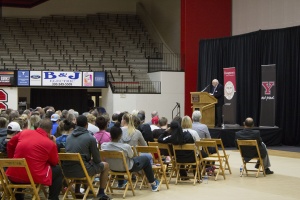 Boone, known for being portrayed in the movie “Remember the Titans,” spoke at Youngstown State University about equality, race and change.

In 1971 Boone was tasked with bringing together whites and blacks to play on one football team, a task new to his era. The uniting of these young men later led to a film that told the story of Boone and his players.

“Because they were willing to talk to themselves and change their attitudes and their community, these young men, as you probably already know, became one of the most powerful football teams the nation has ever seen,” Boone said.

The 2000 film “Remember the Titans” tells the story of T.C. Williams High School’s newly formed football team. Boone, coach of the team, played in the film by Denzel Washington, faced obstacles on bringing the players together and facing racial tensions from the community.

Joseph Mosca, dean of the Bitonte College of Health and Human Services, said having Boone speak was just one more opportunity to start a conversation and make people more aware of the concerns that exist.

“Coach Boone’s story is very compelling. He dealt with a lot of racial tensions as a coach,” Mosca said.

The lecture was brought to YSU through the Centofanti Annual Symposium and was open to the public. Hundreds were in attendance to hear the longtime coach and motivational speaker.

During his lecture, Boone recalled what it was like to see players of different races not only come together as a team, but become like family to each other.

“We built this team from the ground up,” Boone said. “They became the best of friends. Even today. Black friends naming their sons and grandsons after white kids and whites naming their children after their black friends.”

Boone also took questions from the audience at the end of the lecture. One audience member asked him how he felt about the current NFL national anthem protest.

“I disagree. That’s my flag, too. That’s my song, too,” Boone said. “You can disagree with [Colin Kaepernick] because it’s your right. Thank God we live in America where we have rights. I don’t like it, but I stand up for this man for his right to sit and his right to do it, even though I don’t agree.”

He spoke several times during the lecture about standing up for what you believe in.

“Because you were willing to stand up for what you believed in, the world will watch you for generations to come,” Boone said.