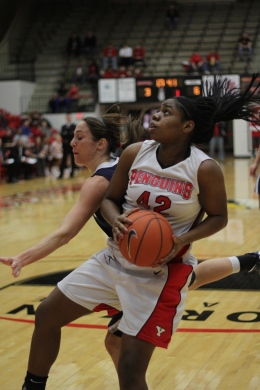 The play designed to push the Youngstown State University women’s basketball team over Butler University with just more than two seconds remaining in the game was set.

Sophomore Monica TouVelle lobbed a pass to junior Brandi Brown at half court. Two Bulldogs covered Brown as she swung it to senior Macey Nortey with the option of shoot or pass.

Nortey decided to pass to senior Kenya Middlebrooks in the corner, but when the ball hit Middlebrooks’ hands, time ran out. Nortey continuously hit her head in frustration and disbelief.

“We were just off by a couple tenths of a second,” Brown said. “We executed the way our coach designed it.”

YSU head coach Bob Boldon said he was pretty happy with the play.

“We were a little sloppy with the ball that probably prevented us from getting the shot off,” Boldon said. “Brandi made a great catch, and we got Macey on the run to make a decision, and I’ll live with that.”

The Penguins were in position to win before Butler sophomore Mandy McDivitt made the shot of her young career, Boldon said.

Trailing 63-62, the Bulldogs got the ball after YSU freshman Heidi Schlegel missed a free throw. McDivitt took the ball well beyond the 3-point line by the Bulldog bench with just more than two seconds left in the game.

McDivitt heaved the long attempt and drained it.

“Percentage wise, that’s definitely a shot you would want to give up,” Brown said.

Boldon said that, from a fan’s perspective, it’s awesome to see a kid make a game-winning shot. But he’s not a fan.

“She stepped up and made, in my opinion, a very tough shot,” Boldon said. “That’s a shot she’ll probably remember for the rest of her life, but from my perspective, I think it stinks.”

McDivitt finished with 18 points off the bench. Senior Devin Brierly, who is averaging 10 points per game, led her team with 22.

“We did a poor job on both of them; I don’t know how else you can say it,” Boldon said. “But our concern was trying to stop their post given our recent history of poor post defense and how well their post has been playing up until this point.”

Boldon was referring to forwards and centers as post players.

“I was happy that we’re able to keep it out of their leading scorer’s hand [Hamm],” Boldon said.

The Penguins’ largest lead was eight with fewer than seven minutes remaining in the first half. The Bulldogs went on a 10-0 run one minute later and led, 29-27, at halftime.

The Bulldogs continued to push early in the second half and led by as many as nine points. The Penguins eventually tied the game, 58-58, with two minutes left after TouVelle hit a corner 3-pointer.

Boldon said Horizon League games should go down to the final seconds.