Handel’s started in 1945 on a hot summer day in July. At her husband’s gas station in Youngstown, Alice Handel began serving ice cream she made from fruit she picked from her backyard. Ever since, Handel’s has branched out to locations all over the United States.

Leonard Fisher, owner, president and chief executive officer of Handel’s since 1985, said Alice’s first batch of ice cream was strawberry, and at the time, there were only two ice cream places in town, and hers was one of them.

Fisher said Handel’s may have the record for the most customers served in a three-hour period in the country. He said Sunday’s were their busiest days for customers.

Fisher said they’ve never changed any of the recipes Alice started with, and have added hundreds of new flavors. He said Handel’s is a great institution, and they have millions of customers who are across the nation as of today, and they wouldn’t be anything without the people in Youngstown.

“We love what we do,” Fisher said. “We ship every Monday and Wednesday.”

Jim Brown, the chief operating officer of Handel’s, said Alice was doing very well with making ice cream, so her husband built her an ice cream stand across the street, which is now the location on Market Street and Midlothian Boulevard in Youngstown. 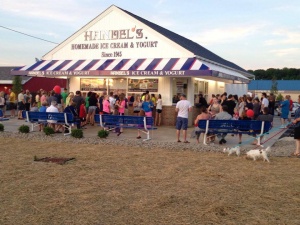 “This is a regional, iconic brand,” Brown said. “The people here in Youngstown have supported Handel’s for a very long time.”

Brown said they have people who come to the window who they may not know by name, but know what flavor of ice cream they get because they always get the same flavor. He said what started here, with a singular store and Alice, has grown into a national brand.

“Our growth has been predicated on Youngstowners that grew up with the product,” Brown said.

Michael Turnbull, the store manager at the Poland Handel’s location, said he always goes above and beyond to make sure everyone who has come into contact with him has been satisfied. He said the way the company is run is the reason for its success.

“Now that we are starting to expand, it’s creating a lot of excitement throughout the nation,” Turnbull said.

Specel Patterson, store manager at the Youngstown Handel’s location, said the way Handel’s started is different and unique. She said it’s awesome how it started as a small location in Youngstown, and then eventually grew into a nationwide thing.

“We ship ice cream out to everybody,” Patterson said. “It started as this little lady just trying to make ice cream for the neighborhood.”

The success of Handel’s has been documented in many national publications including USA Today, People magazine, Chocolatier magazine and US News and World Report.

One thought on “Online Exclusive: Handel’s Homemade Ice Cream and Yogurt: A Tribute to Alice”