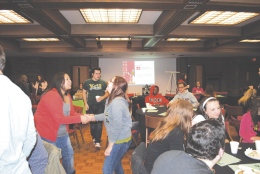 Members of Greek life meet at a mixer in Kilcawley Center on Tuesday. Representatives from each fraternity and sorority were present to discuss group unity. Photos by Kevin Alquist/The Jambar.

Members of Greek life held a mixer in the Ohio Room of Kilcawley Center on Tuesday to voice concerns and unify.

Fraternity and sorority presidents refused to comment on the charges brought against Kappa Alpha Psi, a fraternity in the National Pan-Hellenic Council, Inc., which is under investigation for an alleged hazing.

Instead, they used the event to promote communication among Greek organizations that previously did not foster strong relationships.

The mixer also provided networking opportunities among fraternity and sorority organizations that may not regularly associate with one another.

“This is a starting point for them and an opportunity to talk about what can be done better as a team,” said Carrie Anderson, Pan-Hellenic adviser.

Michael Koziorynsky, GCL chairman and member of the Alpha Phi Delta fraternity, said the event was organized to bring everyone together.

“Our goal ever since Greek life began is to be one strong unit, and this is a way to stick together and stay strong,” Koziorynsky said.

president of the Sigma Chi fraternity, said the strong turnout for the mixer shows strength in numbers.

Joe Boyd, president of Iota Phi Theta, said he hopes to see the entire Greek system on the same page.

“The point of the meeting was to bring everybody together to keep a strong bond within the Greek system,” Boyd said. “It’s for support and keeping communication up so there is no disconnect.”

Mandy Alcorn, Pan-Hellenic president at YSU, spoke to the group, asking the students to “live your values.”

“It’s important for us to realize that and to get rid of any negative ideas toward one another,” Alcorn said.

Alcorn added that GCL recently decided to unite the three separate councils of Greek life into one.

Erin Hall, vice president of programs for NPHC, said she is glad to see unity in action.

“I’d like to see more unity between all of the chapters,” Hall said. “We couldn’t have Greek life if we didn’t all care.”

“It shouldn’t have taken another incident to bring us together,” Cardenas said.

She added that the meeting was long overdue.

“It made me feel like we are all one, no matter what our race or chapter we belong to,” Maltony said.

Members of Greek life meet at a mixer in Kilcawley Center on Tuesday. Representatives from each fraternity and sorority were present to discuss unity between each group. Photos by Kevin Alquist/The Jambar.