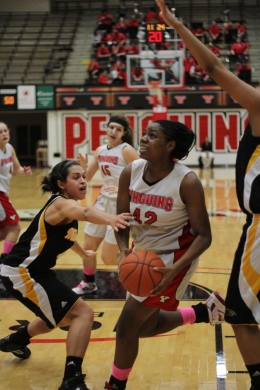 Two weeks into official practices for the 2012-2013 season, Bob Boldon, head women’s basketball coach, said he knows the reality of the situation.

“We’re nowhere near capable of winning a game today, nor should we be,” Boldon said.

Fortunately for the team, the season doesn’t start until Nov. 9.

Having lost two starters to graduation and four letter winners overall, the Penguins added nine newcomers to the team in the offseason.

“I think they’re doing a nice job of learning,” Boldon said. “We’ve gotten better every day since we started practice, and that’s exciting to me.”

For all the changes, YSU returns its most stable player to the team: senior forward Brandi Brown. A three-time letter winner for YSU, Brown was recently voted to the Preseason All-Horizon League Team.

“Being here as a fourth-year senior, it gives me a lot of experience to build off of,” Brown said. “As a leader, I’m just making sure of reinforcing or trying to go along with what Coach Boldon says.”

Along with Brown, Heidi Schlegel and Liz Hornberger return as starters for the Penguins.

“I think Brandi and Heidi could be as good as anybody in the frontcourt,” Boldon said. “But our guards have a lot of work to do to get to the level that Horizon League guards play at.”

While Brown averaged 15.9 points per game and Schlegel averaged 9.7, there is scoring that needs to be replaced from the departure of Kenya Middlebrooks, last year’s second-leading scorer (11.2).

“It’s going to be difficult to replace all the girls that left the team because they all brought something different,” Hornberger said. “But we have nine new kids who are filling the void pretty well.”

Hornberger, a junior, will try to fill the open point guard position left by Macey Nortey.

“Last year, I kind of took a year off [from point guard] … and freshman year was a little hard for me because I was adjusting,” she said. “It feels natural to go back. It’s kind of nice.”

The Penguins were picked to finish eighth out of nine Horizon League teams in the preseason poll.

“You’re talking about getting there in January, and it’s only October,” Boldon said.

“There’s a lot of thing we need to do between now and then, and if we do those things, we can be as good as anybody in the conference.”

Although Hornberger said the team is capable of winning the conference championship this season, Brown just wants to continue the “process.”

“Now in this third year, it’s about winning,” Brown said. “I think we got past the ‘trying hard’ part. … I think we’re at the point where winning is our main goal.”