With the Youngstown State University men’s and women’s track and field winning the Horizon League indoor championships, it will look to repeat outdoors. The team would not be where it is without volunteer assistant coach Eric Rupe. 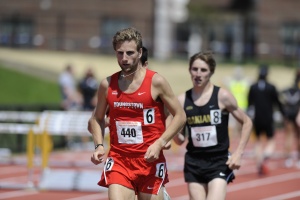 “I ran at YSU for five years and it was just kind of a natural fit for me,” Rupe said. “I was the oldest guy on my team by a year. All the guys I ran with all came back the year after I graduated. Coach [Brian] Gorby was gracious enough to offer me a spot as a volunteer assistant coach. He was trying to help me too since I’m still training as well.”

“Eric has just what you want in a guy,” Gorby said. “He’s got the pedigree of coaching and can bring people together. That is something that I think that is built into his DNA. Both his father and uncle were both great coaches so it seemed natural that he could be too.”

In his time as a Penguin, Rupe laid the foundation for what the program has become. As a part of the cross country team, Rupe became the first male runner to win a Horizon league championship.

“That was actually a really cool experience,” Rupe said. “That year, we hosted the Horizon League championships over in Boardman. I was able to win in front of a home crowd. That sort of spoke to the program. Every year we were so bad and then that year we got better. I had a breakout year and we finished second that season.”

Rupe also said that he is proud that he has helped turn both the cross country and track and field teams into reputable teams.

“His parents were looking to go high school coaching,” Gorby said. “Eric loves YSU through and through. I can see him coaching for sure. I can definitely see him in a situation in the next five to 10 years running a program. He is just a workaholic and he is very humbled. Those are traits that I believe make a good coach.”

Gorby said that Rupe’s willingness to work harder than other people is what made him want to bring him on the staff. Gorby also liked that Rupe will never stop helping other people when they are struggling with something.

“I kind of do a little bit of everything and that’s how I was in college,” Rupe said. “I ran all types of different races. I think that experience was one of the good things. It is what I bring to the table whether it is good or bad. I also think my good and bad races all help me to coach others on what to do and what not to do. I’ve done everything on both ends of the spectrum.”

Rupe also said that without his experiences, both good and bad, that he would not be where he is and that without Gorby he wouldn’t have the skills and knowledge he has now.

“He has always worked his tail off,” Gorby said. “Those are things and traits that I think are so important. He understands how to communicate and how to handle certain situations. The biggest key to his success is he can bring everyone together like glue. He is so team-oriented and has brought the team even more together.”