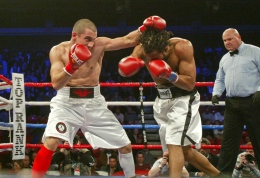 Lightweight boxing contender Jake Giuriceo battled with Henry White Jr. at Beeghly Center on Dec. 19, 2009. The match ended in a draw and has become a source of motivation for his career. Photo courtesy of William D. Lewis/The Vindicator.

Boxer Jake “The Bull” Giuriceo has fought 14 bouts since he turned pro in 2009.

With an undefeated record, his career has but one blemish: a 2009 draw against Henry White Jr. — a fight that follows him today.

“I wouldn’t take that away from my record or from my experience in life because it just completely changed me,” Giuriceo said.

Giuriceo didn’t take the draw lightly. It has fueled his efforts and training, preparing him for every fight over the past two years.

He’ll remember it again when he steps into the ring with Bryne Green (7-4-1) on Saturday for the vacant Universal Boxing Organization All-America Lightweight title at St. Lucy’s Assumption Center in Giuriceo’s hometown of Campbell.

Giuriceo said he doesn’t know a lot about Green.

“I just know that he’s a tough kid, I know he’s coming to fight and I know he wants the belt as badly as I do, so I’m going to go in there and treat him like he’s a world-class opponent,” Giuriceo said. “I don’t underestimate anybody when I’m in the ring.”

Giuriceo added that he lets his trainers study the opponents for him.

“I heard a lot about [Green],” trainer Keith Burnside said. “This is the first opponent we’ve had to train for six to seven weeks to get ready for Jake, so it’s going to be different.”

“Keith basically taught me everything from the beginning,” Giuriceo said. “He showed me all the basics, the fundamentals, and then he took me to 9-0-1 as a pro fighter.”

Duarte lives in Los Angeles and mainly helps Giuriceo when he’s in California, while Burnside trains him in Youngstown.

“I think it’s basically the same, but we talk different,” Burnside said about working with Duarte. “He talks that California boxing out there. Basically, we’re thinking the same thing. We get along great; we talk and everything. We both listen to each other, so I think we both work good together.”

“Keith takes care of him when he’s out there,” Duarte said. “I got full custody in California. Keith did a great job with him before I ever came along.”

Before retiring at 26, Duarte won the Golden Gloves twice and the Diamond Belt amateur boxing tournaments. He also won the California Bantamweight and Featherweight championships.

“As a person, he’s serious, dedicated, very disciplined [and] a good guy,” Duarte said about Giuriceo.

“He’s the good guy in boxing; he won’t badmouth his opponent. Jake falls into the category of more gentlemanly. What I admire about him is his dedication.”

“He’s showed me how to move, how to move my hand, how to turn my punch over right and helped me out with my feet work,” Giuriceo said. “Frankie’s just got a real thorough background in boxing.”

Giuriceo added that he loves being trained by both.

“[Duarte] fought for the world title a few times, and he just got a lot of ring knowledge that Keith didn’t have that Frankie’s been showing to me,” Giuriceo said. “Together, they’ve been a blessing of my life.”

Giuriceo said his biggest strength when fighting is endurance.

“It kind of makes for a tough night for anyone who’s not used to throwing that many punches around or backing up because I’m always coming forward,” Giuriceo said. “I don’t like to back up.”

Corvino is the president for PHD Manufacturing Inc. in Columbiana. Giuriceo is the only boxer he has managed.

“I did this for one person, and that’s Jake,” Corvino said. “It’s not about me; it’s all about him.”