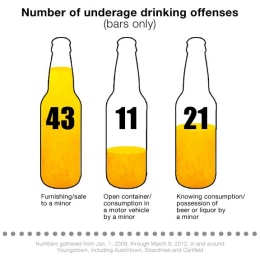 With the arrival of Chief John Beshara, Van Horn says he expects little to change.

“Chief Gocala did a good job suppressing parties and problem bars,” Van Horn said. “YSU doesn’t have parties in the streets or the bar scene that [similar universities] like Kent and Akron do.”

Van Horn credits the proactive approach of Gocala and Youngstown City Prosecutor Jay Macejko for the lack of excessive underage consumption that he said typically creates problems in “college towns.”

Macejko said he believes the same strict enforcement will continue under Beshara.

“I have known Chief Beshara personally and professionally for over 20 years and have no reason to believe that our partnerships would not continue or that we would not have his full support in our efforts at curbing underage drinking,” Macejko said.

During his six years as prosecutor, Macejko has partnered with the Youngstown Police Department Vice Unit and the Ohio Investigative Unit to shut down three bars through the nuisance abatement process.

Nuisance abatement involves identifying a pattern of underage drinking, liquor or other violations that the prosecutor’s office can use to close an establishment for a minimum of 10 to 14 days and, in most circumstances, for up to one year or more.

Along with abatement, the Liquor Control Commission could levy penalties or fines against the bar owner or liquor permit holder.

“One bar that was very near the campus of YSU was closed primarily for underage violations,” Macejko said.

That bar was formerly The Cell on Belmont Avenue, which has reopened under new ownership as Entourage Night Club.

“Several other bars in the area that were targeted for enforcement have either come into compliance, changed ownership or closed,” Macejko added.

He added that two bars in the area are being targeted for enforcement and are at risk for involuntary closure, but could not identify the bars.

Other bars that have been shut down due to abatement since 2006 include Jitso’s Place on the East Side and the Riverbend Tavern on Poland Avenue.

Over the years, the tactics used to enforce liquor laws haven’t changed. Enforcement is still done using the traditional approach of sending undercover agents or supervised underage cooperates into suspect establishments to purchase beer or liquor.

An alternative tactic used by enforcement agents is to recruit volunteers from criminal justice programs and groups such as Students Against Drunk Driving to perform compliance checks.

“We’ll send in someone who is obviously underage and they will try to purchase alcohol with their real ID,” Van Horn said. “If the bartender or clerk sells it to them, we move forward with enforcement.”

“Jay will help us by looking at the facts and what work we’ve done to enforce liquor laws and then file a nuisance abatement and the problem is gone,” Van Horn said.

Part of the challenge with enforcing liquor laws in a college town is that when one establishment is shut down another will pop up.

Van Horn and Macejko said that implementing strict rules and enforcing them would create a business atmosphere that is less conducive to permitting underage drinking.

“Other establishments will see what happens to a business when they permit underage drinking and the bars will often start to police themselves,” Macejko said.