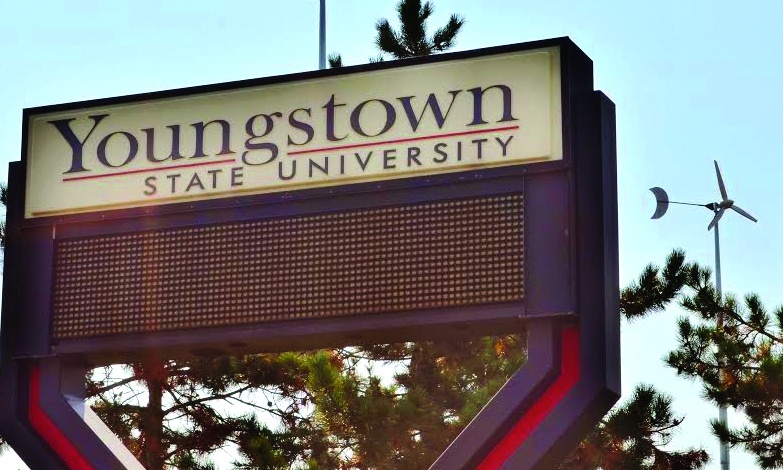 Youngstown State University installed two wind turbines behind Melnick Hall after receiving a grant from the United States Department of Energy. Now the installation of a third windmill is in the works.

The new windmill will be placed behind Melnick Hall alongside the others. All three windmills have adjustable blades, but the new one will also have a shroud to measure its effects.

Hazel Marie, chair of the mechanical engineering department, is overseeing the research.

“We have done wind tunnel testing with a very scaled down model,” Marie said. “The turbine blades were about a foot wide. So in the controlled environment, with steady airflow, the tests have been very positive. But in the real world, with wind turbulence, we just don’t know. To find out is the goal of the third windmill with the shroud.”

The goal of the windmill project is to see whether wind energy is effective and feasible in low-wind areas, like Youngstown. The adjustable blades may be able to maximize wind acceleration at certain angles and make having windmills more cost effective in these areas.

Tim Daugherty is a student helping Marie with the research. He said the collection of data has been halted due to one of the original twin turbines not acting properly.

“We need to diagnose the issue,” Daugherty said. “Once that issue has been corrected, the weather-recording instrumentation can be installed on top of Melnick and data can be collected.”

Daugherty said he is excited to be working with Marie on the project.

“Dr. Marie is an energetic and effective as a chairperson. Not only does she run our department, she also teaches, recruits, and does research on her own. I’m flattered that she asked for my help with this project, and I’ll do my best to not let her down,” Daugherty said.

“The project included funds for the renovation of the building in Warren, Ohio that now houses the Tech Belt Energy Innovation Center,” Hripko said. “The funding allowed for preparation of a usable facility through renovation and deployment of a basic scientific and technological infrastructure.”