Cedars presents Figurehead, Hypnotist and Shultz & the I.C. for a Thanksgiving Eve show at 10 p.m. on Nov. 23. 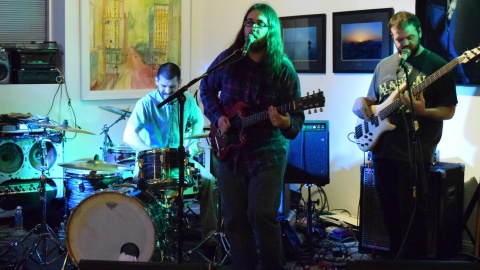 “The name Hypnotist originated from the idea that music can change you and take you into another state of being or state of mind,” Austin Hostetter said. “Much like a hypnotist takes you from reality to a dream-like state, finding the perfect song to capture whatever mood you are in at the time can take you to a whole different place.”

The band enjoys being able to create unique, memorable music for their audiences.

“Our band Hypnotist plays mostly originals, which reflect psychedelic elements and include many different aspects of other music,” Blackson said. “The songs are not for everyone, but we try and create them to be unique and memorable.”

According to Blackson, he infuses the passion he has for music into the band’s songs and shows. The band is planning a new unique performance that will be debuting at the Cedars show.

Hypnotist has been trying to set up a show with Figurehead for a while, but due to busy schedules, it never worked until now.

“We have a good friend in Figurehead that we have been trying to set something up with, but it never really worked out schedule wise. We were finally able to get it going for what we hope to be a huge show,” Austin Hostetter said. “Our keyboard and synth player, Blackson, is in Shultz & the I.C. as well, and they have helped us out with show opportunities in the past, so we wanted to hook them up to return the favor.”

“Our live set includes our original compositions, but with some sections extended for live improvisation,” Hall said. “Thanksgiving Eve tends to be a ruckus night in bars, so we plan to match that energy to our full potential.”

Cedars is a large supporter of local and live music and offers a professional stage setup. With the hometown vibe the bar offers, Figurehead is happy to perform.

“[Cedars] is a great supporter of local music, and live music in general, and has a professional stage setup, sound system and sound engineer on hand to deliver the best possible shows,” Hall said. “This venue has a pretty specific hometown vibe. People who come to Cedars seem to know that the best music is bound to be in performance, so you get a crowd of real listeners.”

People looking to attend the show will have a range of music to listen to from funky alternative to progressive rock.