Geeks Who Drink at Suzie’s Dogs & Drafts brings friends together to test their knowledge of trivia on Tuesdays in Youngstown at 8:00 p.m.

The game consists of eight rounds of questions about various topics.

Steven Whitfield, manager of Suzie’s, said people should play Geeks Who Drink because of the social environment the game offers.

“The social aspect is cool. You can learn off-the-wall stuff,” Whitfield said.

The Geeks Who Drink host makes the night fun. 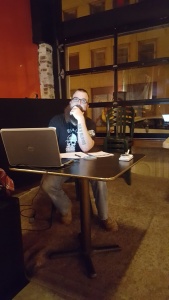 “We have a very sarcastic host that makes it a night that people want to keep coming back to,” Whitfield said.

Tom Ericksen, host of Geeks Who Drink, said people should go to the event because they can be with friends and test their knowledge.

“You come out, you have fun with your friends and you get to relax for a little bit and not study for an exam. You still might learn a thing or two that may benefit you later in life or on your next exam, who knows,” Ericksen said.

Tyler McBride, an employee at Suzie’s, said he enjoys the competitiveness of the game.

“I enjoy the friendly competitiveness. It doesn’t get so competitive that people are yelling at each other. People are having a good time, but at the same time there is a little bit of a competitive edge,” McBride said.

People should go to Geeks Who Drink because they can learn new information.

It takes an hour to prepare Suzie’s for the event, but it can be done in 30 minutes McBride said. To prepare, the manager gets the prizes ready, the kitchen preps itself in the morning and the game host sets up the game.

Katie Bodnar and John Yuhasz, customers of Suzie’s, went to Geeks Who Drink because they wanted to try a trivia game.

“We always talked about going to try trivia so we planned it with some of our friends who are going to meet us,” Bodnar said. 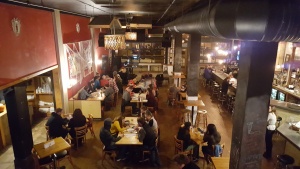 “We came because I want to win. I’ve been coming for a long time and I’m tired of losing,” Buckner said.

Green went to the event because she enjoys the game.

“The questions and trying to come to an answer within your group is fun,” Green said.

Kim Beck, a customer at Suzie’s, goes to Geeks Who Drink because she and her friends enjoyed themselves the first time they participated.

“We were looking for a trivia night and saw it advertised. We liked it so we keep coming back,” Beck said.