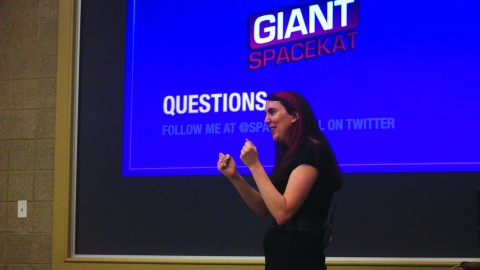 Twenty-five minutes into her presentation at Youngstown State University on Friday night, Brianna Wu, head of development at the video game company Giant SpaceKat, began to tear up.

The harassment began after multiple women in the video game industry became the targets for organized misogynist attacks from sites such as 4chan, 8chan, Reddit and Twitter after expressing their dislike of how women were treated and portrayed in video games and throughout the industry.

The Internet argument, known as GamerGate, spread through the media like wildfire, with Wu bearing the torch and appearing to publicize the scandal on multiple platforms. CNN, Bloomberg and other major news networks spoke with her concerning the conflict.

Wu came to YSU to speak to the students, sharing experiences, tweets and videos, which served as explicit evidence of the harassment at the center of the controversy. She wanted the audience to know what it feels like to be sent rape, death and bomb threats just for wanting to do their jobs well.

According to Wu, around half of all American women play video games, and what they want isn’t brutality or sex; they want “stories instead of mindless violence and sports.”

“I don’t want to take away anyone else’s games, I just want to make new things. Women are usually portrayed as damsels in distress, they always have been,” Wu said. “If you’re a dude playing a game, here, enjoy this sexualized woman as your prize … you’re the king. … [There can be] sexy characters, but they’re people. The camera [doesn’t always have to] focus on her butt or her boobs.”

Wu is one of the many women in today’s gaming industry, ranging from developers to game journalists, who experience a violent form of cyber bullying that some relate to being closer to domestic terrorism.

She reports having multiple death and rape threats sent to her daily online, ranging from mundane insults to outright explicit threats of bodily harm. Her address has also been plastered all over the Internet, as groups of people claim that they’re organizing to kill her.

While a large portion of society supports Wu and the other women who are fighting for feminism in the gaming community, there is a sizable and more highly vocal portion of people who believe GamerGate is a stupid, useless plea for attention — a way to turn victimization into profit.

After she finished her presentation, Wu opened the floor up for questions, and a young man in the front row raised his hand and began criticizing her message. When Wu asked if he had a question or was just going to go on a rant, he said he wished her to speak on the positive impacts GamerGate has had on women.

Wu laughed, spat out a furious “seriously?!” and continued on. The man got up, said a few choice words and angrily stormed out; the police were not far behind. The young man left his bag in the center aisle, which Wu eventually had removed, explaining that she’s received many bomb threats and has a bit of Post Traumatic Stress Disorder as a result.

I sent out a tweet directed at Brianna Wu that night that read something along the lines of: “So glad to hear @SpaceKatGal talk about #GamerGate at YSU! What a great inspiration. #girlsforgirls.”

After the first reply to my tweet from a random stranger telling me that “there were way better role models in the tech & gaming industry” and that “she’s an internet troll and victim,” I deleted the post. Three more tweets coming from the same person and multiple favorites and retweets later, I realized how serious the Internet was about GamerGate.

My tweet was benign and my responses bland as well, yet it still elicited responses from random critics from the web. Their responses ranged from mild disinterest in my opinion to annoyance at my sentiment. Scouring the Internet’s social networks, I found that Twitter, as well as Facebook, Instagram and Reddit, were filled with hate coming from both sides — from GamerGaters and their critics alike.

Hate on the Internet isn’t just about GamerGate either. Any semi-recognizable social figure who has a following on any social media site gets an extreme amount of comments from random people spewing out detestable words in their direction, for seemingly no reason.

GamerGate is the hate filled controversy that is in the spotlight at the moment because the gaming generation is the one that grew up with technology. Abhorrent feelings for major and minor celebrities and companies have always existed, but with today’s technology, it gets personal. Everything is just a click away.

In years past, if someone felt a strong hate toward something or someone, they would have to work to get their voice heard. They would have to express their opinion strongly enough to rally other individuals to work with them and possibly use a petition to get anyone to pay attention to them. Agents of change relied on work and perseverance, not hashtags and Facebook likes, to send a message. The bar for what messages deserve adoption by the public has been drastically lowered thanks to the Internet.

It also makes it hard to realize that what you’re saying and doing goes straight to another individual sitting at the other end.

These statements and ones of the like are said on the Internet all the time with no repercussions. But if the same threats were said face to face, the person in question would be considered a psychopath.

Maybe it’s because you can’t see the person you are insulting’s face as you demoralize them, or maybe because it’s unlikely that you’ll be met with any legal ramifications for your actions. Both scenarios are cowardly and neither serves as justification for mistreating another human.

At a time when social media and technology have seemingly made our lives as human beings more malicious, maybe one needs to step back and consider that it could be the malice in our human nature shining through, amplified by the anonymous veil of the Internet.