If the Halloween season has sparked interest in eerie sights and the desire to listen to live music, there may be a place that can fulfill these demands.

Located on Wick avenue, the Wickyards is a non-profit music venue locating in the previous McVean Funeral Home building, which closed two years ago.

Chief Operations Officer Erik Engartner said the Wickyards has been hosting shows for about a year and a half. He used to host shows at a venue in Boardman known as the Backyards, which, shut down in 2014. 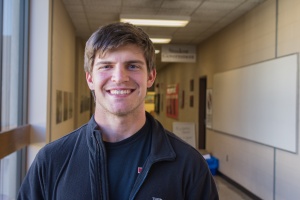 When Erik Engartner’s father bought the former funeral home, he said he wanted to find a way to give the building a new purpose so it wouldn’t get turned into a parking lot. Since founding the venue, Erik Engartner said he’s been able to find bands to play on a monthly basis and pique the interest of many who enter.

The building still holds onto pieces of its past with a sign still bearing the funeral home’s name and equipment that was used for embalming left behind. A room in the building that used to keep the deceased still holds a wooden outline for casket storage, and a few caskets remain.

The venue allows an audience to see these acts as well as an opportunity to explore the building.

For acts, it’s an opportunity to test their music in front of a crowd while avoiding another bar show.

Joe Churpek, singer and guitarist of the band Fifer Pig, played his first show at the Wickyards on Friday and experienced something new playing at the venue.

“This is one of the coolest places I’ve ever played,” Churpek said. “I’ve played in a few abandoned churches but never a funeral home.”

Erik Engartner said that he thinks most people who come admire the uniqueness of it all and to venture around the vicinity.

“Most people who come in initially want to explore,” Engartner said. “I miss a lot of bands who play here because I’m usually too busy giving somebody a tour of the place.”

Catherine Engartner, Erik Engartner’s mother, said the venue allows for acts to test their material in front of a crowd and get a feel for what it’s like to be on stage.

“For some of these bands, it’s their first time playing anywhere,” Catherine Engartner said. “This is a great way for bands to bring friends and see how people respond to their music.”

The most recent show on Friday the 13th featured five acts of different ages and amounts of stage experience. The crowd grew as the night progressed with people floating in-between the music and lure of the building.

Erik Engartner is unsure as to how long this stint at the Wickyards will last, but said he’ll stay there as long as he can.

“If all works out, I’ll stay as long as possible,” Engartner said. “I want to keep it going by creating more exposure of what the building is and what it has to offer.”

The next show at the Wickyards will be Dec. 8. Details about who will be playing will be updated on its Facebook page.

One thought on “A Funeral Home Brought Back to Life”