Youngstown State University student Joe Anastasia may be known as a member of YSU’s hockey team. His passion off the ice as a stand-up comic is less physical than hockey, but can be just as adrenaline-filled. 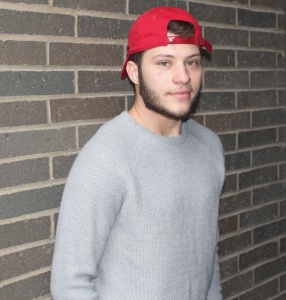 Q: When did you start doing stand-up?

A: My first show was about seven months ago at a club in Pittsburgh called Hambones. I didn’t know of any shows in Youngstown at the time so I just went for it.

Q: How would you describe your stand-up style?

A: I haven’t really found my style yet. Sometimes, I try to be more animated and goofy and other times I approach my routine straight on. I try to base it off of what’s worked previously as well as reactions from the crowd.

Q: Are you more of a clean comic or do you tend to use profanity?

A: Occasionally I swear but for the most part I try to keep it clean, which, I’ve found is sometimes really hard to do. I want to keep it clean just in case stand-up doesn’t work out and I need to get a job; there isn’t video out there of me being obscene. I don’t want a hirer to recognize me as the guy who drops a ton of f-bombs.

A: The hardest part for me is interacting with the crowd and trying to figure out what they like and dislike. I don’t think that just having good jokes is enough if I want to be a great comedian. Having great jokes and getting the crowd involved together can be real game changers and separate you from other comedians.

Q: Do you find it difficult to write material?

A: I think the difficult part of writing material is writing jokes that I think are funny and hoping that a crowd thinks they’re as funny as I do. Some jokes take a little time to write and others come to me fairly easy.

Q: Tell me about the worst show you’ve had.

A: My worst show was at Nick’s Lounge in Niles. I remember being excited before the show, picking out what jokes I would use based on the environment and how the crowd was reacting to the other comedians. I went up there and the stage lights were hitting me right in my face. I started to feel out of my element but still thought I could get through it. Through my whole routine, I only got a few laughs and just felt like I wanted to quit.

Q: Tell me about the best show you’ve had.

A: My best show was actually a week after the show I had in Niles. I was asked to headline a show at Suzie’s Dogs & Drafts for Rookery Radio. Initially, I didn’t want to do it because of the last show but then I thought that I’ve already done the worst I could possibly do so I didn’t have much to lose. Everything worked out, there was a good sized crowd and the jokes I picked out were geared toward college students which most of the audience seemed to relate to. That show taught me that you have to have a bad show to really appreciate and enjoy the good ones.

One thought on “From the Ice to the Stage”