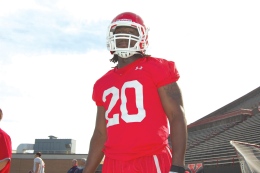 Ashen Ward watches from the sidelines at Stambaugh Stadium on Wednesday afternoon. Ward, whose final year of basketball eligibility has passed, is trying the likes of football. Ward has one year of eligibility remaining. Photo by Josh Stipanovich/The Jambar.

A month ago, Ashen Ward wore the Youngstown State University “Y” on his chest. On Wednesday, as the YSU football team continued its spring practice, Ward sported the “Y” on his helmet.

A four-year basketball player for the Penguins, Ward will take his athletic 6-foot-3-inch, 214-pound frame to the football field.

“When you got a great athlete walking around campus, you have to take a look at him,” said head football coach Eric Wolford. “The thing I see with him is he’s very athletic, very strong, very explosive and very smart.”

Having never played football before, Ward participated in his first practice on Monday. He said putting on the pads and the helmet is something he has wanted to do.

“It’s always been a dream of mine,” said Ward, a Cleveland native.

“I wanted to play in high school, but was turned off by a football coach. I stuck with basketball to prove some people wrong.”

Ward was a two-year starter for the YSU basketball program. As a senior captain, he led the Penguins to a 16-15 record while averaging 10.2 points per game.

“Now that my basketball career here is over, it’s a great opportunity for me to play football,” Ward said.

Ward will be seen as a project for the coaching staff. To take advantage of his size, speed and 41-inch vertical, Wolford said he wants Ward to play wide receiver.

“Just throwing the ball to him, you can tell he’s got soft hands,” said

Shane Montgomery, YSU offensive coordinator. “The biggest thing for him is how quick he can pick up the offense. Going from a basketball system to a football system, obviously it’s a big difference.”

Though still early on in Ward’s development, the coaching staff has been impressed with his football mentality.

“We’ve asked him a lot of questions,” Montgomery said. “Every time there’s a rep, we ask him what he’s got, and he’s been pretty good with it.”

Ward said he’s been surprised by the praise from his coaches.

“They tell me a lot of positive things I didn’t expect to be doing that well so soon,” he said. “They tell me I have a lot of natural talent that will really work out for me once I get a hold of [the offense].”

“When I’m at receiver, I feel that every ball that goes up is a rebound, and I would pride myself on getting rebounds in basketball,” Ward said. “Even separating myself on the field, using a move I might have used on the court could help.”

“He’s a physical specimen,” Wolford said. “Those Division I college basketball players are good athletes. We just have to get him out there and see what he can do.”

Wolford plans to evaluate Ward for the first time in practice on Friday, then in the scrimmage on Saturday. He will line up at receiver as part of the second team.

“I’m not going to be too judgmental right now,” Wolford said. “We got to give him some time and give him some practices to get his feet wet.”

Still, Ward will not lower his expectations because of his inexperience. In fact, he has set a goal for himself: be ready to contribute for the Penguins in the fall.

“I’m going to grind out the rest of the spring and grind out the summer,” Ward said. “Hopefully, I’ll put myself in a position where I can go out and help the team in the fall.”