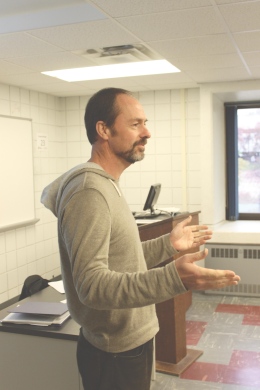 On Oct. 8, Brian Bonhomme, an assistant professor of history at Youngstown State University, donned a gray hoodie, jeans and a salt-and-pepper beard as he lectured to his environmental history class.

But he was used to a different wardrobe and audience from 1980 to 1986 as the frontman of the British pop band Roman Holliday.

Bonhomme left school at 16 to pursue a music career. He advertised for musicians in the local newspaper, and through several lineup changes and countless gigs in and around his home county of Essex, near London, the band started to take shape.

“The first thing we released was an EP,” Bonhomme said. “We had a single called ‘Stand By’ that got a lot of radio in Britain and in the States, too. We then released ‘Don’t Try To Stop It,’ which was the one that was a hit in Britain.”

The band appeared on “Top of The Pops,” a legendary but now defunct BBC television show that featured videos and prerecorded live performances from top-40 artists. The song reached number 14 on the British charts, sharing the top 40 with Elton John, The Cure, The Police and The Style Council, among others.

“I’m very proud to say I wrote that song,” Bonhomme said. “Music and lyrics. It’s my claim to fame.”

Bonhomme said that as band members were added, Roman Holliday started to pick up swing influences.

On a visit to a record label in London, when Bonhomme was 19, he overheard someone playing a trumpet in Soho Square outside. He immediately asked him if he wanted to join the band. Roman Holliday already had a saxophonist, and the brass addition completed their sound.

During the peak of the band’s popularity, Roman Holliday was signed to the then-fledgling Jive label, which eventually grew to become a large producer of U.S. pop acts including The Backstreet Boys, Britney Spears and ‘N Sync.

After the success of their first records, the band had difficulty finding an audience for their newer material.

The label tried to switch their sound and their image to make them more commercially viable, but the already strained relationships within the band and with the label began to sour.

Bonhomme quit the band in 1985, and spent a couple of years living in dives in London, scraping by and trying to get another band together. After several failed attempts in London, he relocated to New York. He found work as a jobbing guitarist, but eventually abandoned music for academia.

“I was 26 when I started in college,” Bonhomme said. He attended City College of New York from undergrad through his doctorate. “History just seemed to work for me. Every paper I wrote got a great grade, [and] I won all these scholarships and awards. … It just seemed like the gods wanted me to be in history.”

He developed a special interest in Russian history after meeting his wife, a Belarusian national, at the start of his undergraduate career.

“I have to say, my decision to study Russian things was entirely because of her. I wanted to impress her, so I bought a Russian phrasebook,” Bonhomme said. “And the campus taught courses in Russian. It all worked out very nicely.”

After completing his doctorate, Bonhomme moved to the University of Central Arkansas for a visiting professor position. After four years there, he moved to Youngstown, and has remained here since.

“I was always applying for tenure-track Russian history positions, and YSU had one of those open in 2004, which I applied for and, very happily, got,” Bonhomme said.