Youngstown State University, once an active campus, is now deserted and silent as the first month of the cancellation of in-person classes comes to an end.

Numerous events have been canceled due to COVID-19, including the eighth annual EveryBODY Fashion Show, which was scheduled for Friday, April 10.

The body-positive show is dedicated to Danielle Peters, a former merchandising: fashion and interiors student of YSU. Peters died due to complications from bulimia in the summer of 2012.

While the fashion show organizers promise a fantastic show when it returns next year, they’re experiencing the same sadness as many on campus about the change of plans.

Jennifer Frank, an adjunct merchandising: fashion and interiors instructor, would have been returning for her third year in charge of the fashion show. 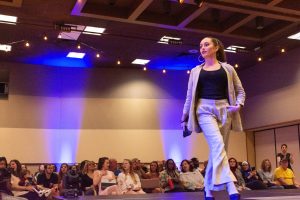 “I was very disappointed when the EveryBODY Fashion Show had to be canceled. I knew that it was the right decision, but I felt bad for all of my students who have worked so hard to put on this year’s show,” Frank said.

The team that brought the EveryBODY Fashion Show to life consisted of students taking the fashion promotion and fashion show production class.

The show was a third of the way through preproduction before students received the news.

Kaitlyn Hoover, a sophomore merchandising: fashion and interiors student, gave her reaction to the events.

“I discovered the show was canceled through a group message we have with our professor. We were pretty much prepared for the show to be canceled,” Hoover said.

She said everyone in the class understood the decision was for the best, but the feeling of disappointment among her classmates was mutual.

“I’m very disappointed the show is canceled because I lost my chance to participate in the creation of the show, and all our hard work and great ideas won’t be seen in action,” Hoover said.

Lauren Aey, a senior merchandising: fashion and interiors student, has modeled for the EveryBODY Fashion Show before and was going to share the experience this semester with loved ones.

“I was looking forward to this year’s show because this would have been my third year as a model, and my mom and 7-year-old sister would have joined me on stage,” said Aey.

The online format will instead teach students how to put on a show through notes and videos without producing a physical show.

“Even though we are unable to put on the show, I think our professor did an amazing job of showing us how to put on a show,” Hoover said.

Madalyn Baker, a senior merchandising: fashion and interiors major, has been involved with the fashion show her entire academic career at YSU.

“Working the show was a lot of fun. I loved being a part of something so special,” Baker said. 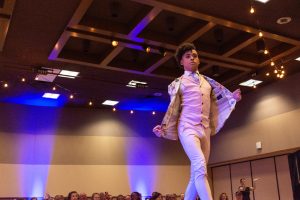 She said participating with the show was challenging in the way of collaborating with other students and bringing the final product all together. She was glad she could experience this in a classroom setting.

“It is a long process organizing the EveryBODY Fashion Show. I help guide the students start to finish in promoting and organizing a fashion show,” Frank said.

Frank assigned students to roles behind the scenes. The show’s various positions such as hairstyling, videography, cueing and organizing for the different clothing categories were assigned through a vote in the class from classmates or from Frank.

Once jobs were assigned, the students designed invitations to promote the event, keeping to the theme of the show by including all body types.

“We have models of all shapes, sizes and races. Our youngest model has been 6 months old to our oldest model that is 70 years old. We have had drag queens and transgender models. We want to promote the show towards everybody,” Frank said.

Following the job assignments was the search for models, which is another responsibility of Frank’s students. The students used social media and the YSU app to track models down.

“What motivated me to be a part of the show is how rewarding it is to spread awareness about eating disorders, as well as honoring Danielle,” Aey said.

When the models are found, they’re divided into clothing categories chosen by the class. Models can choose outfits from their own wardrobe.

However, models who don’t want to use their own clothes will take a trip with the designers the week before the show to be fitted for outfits donated by T.J. Maxx in Boardman.

A practice runway show would be performed in the Chestnut Room in Kilcawley Center the night before the show.

“What I take away from it all is to always be prepared; anything can occur whether it’s good or bad, so don’t expect everything to go as planned. If something gets canceled, work harder to make the next year’s event even better, and always appreciate those who help,” said Aey.

Plans for next year’s show are already underway, Frank said.

“I’ve been writing down some ideas as they come to me, but I am not ready to share them now. I want to come up with some more ways to increase audience participation. You will have to stay tuned to see all of my ideas,” Frank said.

The date for the 2021 fashion show has yet to be determined.