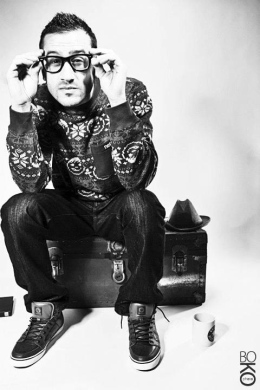 Four friends from the Youngstown area had high hopes for their future in music. Individually, each man had his own creative skill set. Now, they are joining forces to find fame.

Jason Melidona, 28, works full-time as a part of the Geek Squad at Best Buy to support his 4-year-old son and pay his bills.

Melidona, also known as JayMel, is trying his hand in the hip-hop industry, and he won’t stop until he makes it.

“I never really knew what I wanted to do with my life. I would have some things that I could do if I decided to give up the music, but music has taken center stage,” Melidona said.

His music was broadcast on a local radio station, 101.9 WRBP JAMZ, after winning the Home Jamz contest for best new single in 2009. As a prize, he traveled to New York to work on his career.

In 2009, Melidona also signed a contract with Josh Fisher and Lamar Christian, two of the four friends, which kick-started his career.

Fisher, who lived in Los Angeles for eight years, started a managing company called MacMedia and signed Melidona to his label.

“At the time, I couldn’t really do much for him ‘cause I was still young, and I was trying to develop myself and my career as a young man,” Fisher said. “Now is the time where things are just coming into place. I’m able to focus, and he’s at an all-time high with creativity.”

One of the more creative aspects of Melidona’s music, he said, is the blend of different sounds. The rapper played drums for nearly 16 years, which he said gave him a rock ‘n’ roll edge.

This, in part, is what initially caught the eye of Melidona’s public relations manager, Weyu Wantata, who was his disk jockey from 2007 to 2010.

Christian introduced Wantata to Melidona during a show at then Barley’s downtown. Wantata said he was impressed with his “total package” as a rapper with his presence and his lyrics.

“He had my attention, which was a victory in itself,” Wantata said. “Back then, rap was about a lot of gangster or dope game. I thought he was the only artist there that was actually genuine with me.”

Wantata said he listened to Melidona’s music after their meeting, when he was going through a personal conflict.

“I definitely was struggling with who I wanted to be and what career field would make me happy,” Wantata said. “I was burning out at my current job.”

Wantata was partially unemployed in 2009 and was suffering financially. He always felt the young rapper had a unique talent that made him feel better.

Melidona writes his own lyrics, but said he works best spontaneously, feeding off his daily routine at work and home.

“I’m more spur of the moment. I’ll just write a full song on one sit down. Usually, it’s not a couple days of writing music; it’s just whatever mood I’m in at the time,” Melidona said.

Seeing his son after a day at work, he said, is another one of his biggest inspirations.

“My 4-year-old son is probably the most important thing in my life,” Melidona said. “He’s always wanted to play the drums, and he’s always begging me to set him on my lap and bang away.”

Melidona admits if he had been in this position several years ago, he would not have been mentally prepared for it. Working with Fisher and his other friends, he said, has been his biggest motivation.

During their 8-year friendship, Melidona said Fisher always guided him musically. He said most people think making one good song and having a friend in the industry will lead to fame, but he realized that is not how it works at all.

“It’s just the business at the end of the day. It’s not just one person that makes things happen, it’s a whole team of people that can make it happen,” JayMel said. “If one person thinks that they’re good enough to make it on their own, they’re very wrong.”

Wantata said the experience has tested every emotion he could go through, but the inspiration created by the close-knit group is unmatchable.

“Working with the group, you just feel so much energy, and it’s like, ‘Wow, if we continue with this, we could really do something that we never imagined we could do,’” Wantata said.

Melidona said Fisher could “most likely” get him a record deal. However, he and the rest of the group want to keep things the way they are, for now.

The men, Melidona said, enjoy working with each other, and the last thing they want is a “big hand” pushing them around.

“I have all these guys that have been through the thick and thin of me looking like a loser out there or me looking really awesome,” Melidona said. “And all of these guys have always been there regardless of the situation I’ve been in there, so it’s like we’re all best friends, and it’s more of a family thing.”

Throughout his work with Melidona, Wantata said he quickly learned that Melidona is one of the sharpest listeners he has ever met. He said he takes advice and sets it in action.

“He has the ability to write amazing songs, but without the right personality and the right work ethic, that’s not really enough,” Fisher said. “What separates the winners from the losers is personality and dedication, and that’s what Jay has.”

Melidona’s short-term goal is to be able to quit his day job at Best Buy and sustain his family through music. The long-term goal, he said, is to be able to live comfortably off his fortune after his music career fades.