Executive director of OK Inc., Peggy Pecchio, said the goal is for younger men and women to find their voice in society and to become future leaders.

Pecchio said young people are very intuitive on how they can help others who find themselves in a difficult situation, whether it’s drugs or alcohol use. 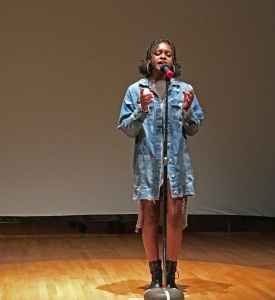 “Young people often know what they can do to help their friends,” Pecchio said. “We’d encourage people to come and to see what their fellow students are doing.”

The program liaison of OK Inc., Deborah Landis, said the students are selecting the topics they want to create their short films about in the Friends4Friends Campaign.

These students are speaking from the heart about the issues they see as a problem in their schools, Landis said.

“The campaign encourages them to stand up and speak out,” Landis said. “It’s giving them a voice to speak against such issues or stand up for them.”

Mikayla Moore, a 2015 Chaney High School graduate and current student at Youngstown State University, sang “The One and Only Me” for the event’s opener.

According to Moore, this event was a fantastic way to bring awareness to these issues and to feel involved in something that is such a big deal.

“This is an award show for high school students, so it kind of makes them feel like they’re a part of something,” Moore said, “and it’s for a good cause.”

Having a lot of fun being a part of the film festival, Moore said the event gives people a sense of hope and offers a great opportunity to get informed about the topics that OK Inc. covers.

Two out of the four years Moore was a student at Chaney High School, OK Inc. came and presented to her and her fellow students an opportunity to write stories concerning dating abuse.

Moore said she ended up recording a song for one of the videos at the time and performed it at one of the OK Inc. showcases.

“We used to stay after school certain days to work on the movies and the songs,” she said. “All of those kids come out to watch all of the videos and all of the art pieces that they put together.”