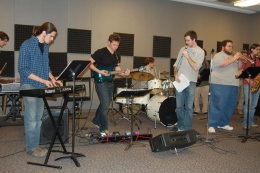 Penguins in Bondage works during rehearsals for its upcoming performance at the Lemon Grove Cafe. Photo by Shannon Watson/The Jambar.

John Anthony became intrigued with Zappa’s music in the spring of 2011, after he started a research paper exploring Igor Stravinsky’s influences on Zappa’s music.

“I started transcribing some of his pieces for fun,” Anthony said.

After comparing Zappa’s work to others, Anthony decided to start an ensemble that played Zappa’s music.

The group became known as Penguins in Bondage, named after an original song by Zappa.

“It’s an interesting title, and it’s YSU’s mascot,” Anthony said. “It just worked for us.”

Drummer Ed Davis referred to the group as Anthony’s baby.

“I’ve taken a lot of pride in it,” Anthony said.

Anthony did a lot of the legwork to get the ensemble up and running, such as finding the right people.

Getting the right people in the group was not easy.

“We wanted people that had an ear to hear what it’s about,” Anthony said. “We looked for people that not only had an interest, but could understand where the music comes from.”

The group felt most comfortable halfway through the fall semester, after Zach Connolly took over the previous singer’s position.

“There are a lot of hard musical things, but you need the right guy that leads the group that has the right sense of theatrics and humors,” Anthony said.

Connolly grew up listening to Zappa, and his interest built up in his high school years.

“I already knew a lot of his songs, and for the ones I didn’t know, they were pretty easy to figure out,” Connolly said. “It was more difficult picking up the half-narrating and getting into that type of character.”

Penguins in Bondage said it doesn’t have a particular audience it wants to entertain, but knows to whom it wants to appeal.

“We are wanting to find a bunch of different target audiences,” Anthony said. “There is a very cult-like following; a true Zappa fan will have an extensive knowledge. … They are going to know if it’s right or wrong. … We also try to get the music students involved.”

Penguins in Bondage said it wants its music to be heard in order for students to see the prolific and influential type of composer Zappa was.

“We just want to get his name out there,” Anthony said.

Penguins in Bondage practices for an hour every Monday, Wednesday and Friday. Students can join for class credit.

Anthony said he expects being in the group will be beneficial for his future.

“It’s definitely improved my singing abilities and helps prepare me for when I want to play with other bands,” Connolly said.

The group already has a couple of performances under its belt. Its biggest was at Cedars Lounge, where it performed for an audience of about 300 people.

The group tries to keep its performances similar to ones Zappa would have done.

“His performance would never be the same as it was the night before,” Anthony said. “We are trying to add our own changes in our performances so that they are different.”

The group said its biggest highlight was the approval and support given when it contacted Dweezil Zappa, Frank Zappa’s son.

“We sent him a recording of what he had done, and he really seemed to like it,” Anthony said.

Penguins in Bondage plans to carry over into the summer and keep performing. Four performances are scheduled for this spring. It will be playing March 9 at the Lemon Grove Cafe at 10 p.m., April 1 at Bliss Hall in Room 2222 at 7 p.m., April 16 at Kilcawley Center at 8 p.m. and May 18 at Cedars Lounge at 10 p.m.