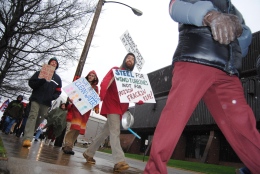 A flood of protesters marched through campus Wednesday en route to the Youngstown Ohio Utica and Natural Gas conference at the Covelli Centre downtown.

More than 200 protesters traveled from Ohio and Pennsylvania to raise awareness of the widely debated harms of fracking.

Outside the Covelli Centre, chants of, “O-H-I-O hydraulic fracking’s got to go,” surrounded the conference that promoted fracking, a process of extracting natural gas and oil from bedrock.

The protest and conference was preceded by a Youngstown State University announcement to open a Natural Gas and Water Resources Institute proposed by Martin Abraham, dean of the College of Science, Technology, Engineering and Mathematics. The institute would create undergraduate courses and a gas technologies minor.

“Given YSU’s location in the heart of the Utica shale region, this new institute is well-poised to meet the educational and research demands and needs central to this new and growing industry,” Abraham said in a YSU press release.

While protesters outside the downtown conference echoed the arguments against fracking, Rich Musick — a board member for the Western Reserve Port Authority — argued the economic benefits, specifically the employment opportunities the Utica and Marcellus shales could bring to the community.

WRPA purchased property formerly operated by Indalex in Girard. The property was leased to V & M Star, a steel manufacturer, to store construction materials during its $650 million expansion.

“Even jobs not necessarily involving drilling but pipefitters, welders and plumbers as well,” Musick said. He added that there would also be openings for geologists.

Andres Visnapuu, also a board member for WRPA, said that Youngstown is a good location.

“We have a phenomenal location to become a service hub for responsible natural resources,” Visnapuu said.

Susie Beiersdorfer, a part-time instructor of geology at YSU, helped to organize the protest. She visited the expo for her own edification, despite her beliefs.

“We do not have enough regulations in place for the whole drilling process from the drilling, use of the water and where to take that water after it’s been fracked and full of chemicals,” Beiersdorfer said.

The Associated Press reported Sunday that the V & M Star $650 million expansion would provide 350 Youngstown jobs as the mill will produce pipes and materials used in the fracking process. Still, Beiersdorfer said that that amount of jobs would not be enough to help the local economy, struggling with 11 percent unemployment.

Visnapuu said that he is aware that the chemicals in the water can be harmful.

“It’s something a lot of people should be aware of and become informed and educated of. What is in it should be public info,” Visnapuu said.

Musick said that there are other ways to frack without being harmful, such as water recycling instead of using injection wells. He added that there could be new ways to treat the water.

Musick said he would promote a “safe set of procedures” for the fracking process.

Still, some in the public remain skeptical of the ecological effects of fracking.

“If we let this happen, our water is going to go. Once the water goes then everything will go,” said Chelsea Tunnell, a volunteer with 350.org, a national organization that fights climate change.

Andrew Sidesinger travelled with colleague Tunnell from Cincinnati for the protest.

“We’re here to let everyone know, including the fracking industry, that we’re going to fight it because it’s dangerous, dirty and a polluting practice that hurts people,” Sidesinger said.

“Fracking is incredibly climate changing because of the methane gas that leaks out,” Sidesinger said.

Tunnell said that she was upset when she marched to the Covelli Centre to see a drilling platform greeting them.

For others, the drilling platform represented job opportunities.

Musick said that students could reap those employment opportunities.

One benefit could come as early as December, when the YSU Board of Trustee’s vote on a new institute centered around the Utica shale extraction of natural gas.

“Establishing YSU’s presence in this fast-changing field is a critical necessity if we are to have a role in educating the future workforce to support this economic growth opportunity,” Abraham said.

Ron Cole, director of university communication, said the proposal of the Natural Gas and Water Resources Institute is YSU’s part in cultivating business opportunities in the community.