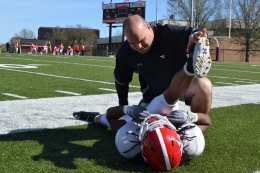 Brothers Mike and Nick Cochran never had a chance to like anything but football. It was in their father’s blood. Now, they spend their free time watching their daughters cheer and dance.

The Cochran brothers played football in their backyard in Girard with their dad and with the Girard Little Indians when they were both 6 years old.

Now, Mike Cochran is the strength and conditioning coach at Youngstown State University, and his younger brother, Nick Cochran, is the head coach for the Girard Indians at Girard High School.

Lifting weights was always a passion of Mike Cochran’s. He works out with two autistic students from the Rich Center for Autism every day at 11 a.m. at Stambaugh Stadium. He said the experience is humbling.

After playing football for Girard High School from 1983 to 1985, he was a starting linebacker for the Penguins, under former head coach

Jim Tressel. He then served as the strength and conditioning coach at YSU from 1996 to 2000.

He followed Tressel to Ohio State University in 2001 and spent four years as the strength and conditioning assistant under Tressel.

After his second year at OSU, the Buckeyes defeated the Miami Hurricanes in double overtime in the BCS championship game.

“Tress was just a inspiration to everybody,” Mike Cochran said.

Nick Cochran played football at Girard, OSU and YSU. He said Tressel had similar qualities to his father, Joe Cochran.

Joe Cochran passed away in 2000, but his sons said they learned family values, drive and compassion from him.

Nick Cochran attended OSU on a football scholarship in the fall of 1989. He was redshirted for a year and left the Buckeyes to return to YSU.

During that year, he backed up Kirk Herbstreit, former starting quarterback for OSU.

“It was a good experience playing against Division I athletes, but it was difficult until I got my feet wet,” he said. “I just didn’t enjoy the time sitting out and waiting. I returned to YSU for the opportunity.”

He said his most memorable moment was Girard’s 11-2 record and nearly making it to the state championship. But, for him, it was about more than the game. It was about the Girard community.

“It was the way the kids came together and started acting like a family — the same way we made it to the national championship game my senior year at YSU in 1992,” Nick Cochran said.

The Penguins lost that game, 31-28, to Marshall University.

“But we rallied together,” he said. “That’s what Tressel always built in us and my family.”

Mike Cochran and his wife, Traci, had their first daughter, Mikayla, in 1998. Their daughter Raegan was born in 2002.

“I just wanted one boy,” he said. “But you can’t beat the two girls. They’re the best,” he said as he hugged his youngest daughter.

While he didn’t get his wish, he said his daughters enjoy watching football games, and he loves having them with him on the field.

“Mikayla was the only guest allowed in the Ohio State and Michigan closed practice. It was cute. She was only 3 years old, and I had picked her up from day care, and she came in with me,” he said as his eyes teared up.

Mike Cochran was then hired as the head strength coach at Marshall after leaving OSU.

He returned to YSU in the spring of 2011 as strength coordinator, and said Youngstown is the best fit.

He said he misses living in Columbus and the relationship his family had with the Tressel family.

“I should have never left Ohio State, but it’s great to be home, and this is the best place for us,” Mike Cochran said.

Traci and Mike Cochran have been married for 18 years, but he seldom sees her or his daughters. If he’s lucky, he gets to spend 80 days with his family each year, he said.

“It’s hard being away from my family. We’re always traveling and working a lot,” he said. “I come home exhausted, and then I am up again at 4:30 a.m., and I barely see my wife.”

Traci Cochran said it’s tough because her husband often misses birthdays and holidays. She said people assume his job ends after football season, but it is a year-round occupation.

“The real coaches are the wives,” Mike Cochran said. “ We do what we love. It’s easier for us, but we put a lot on them. It must be hard to be a coach’s wife.”

Nick Cochran works with his wife, Angela, at Girard High School. He works as a physical education teacher, and she’s a guidance counselor.

She said she has always been supportive of her husband’s football career.

“I guess, since we’ve been dating, since I was 21, he always coached. I didn’t know any different, and I was feature twirler at YSU, so I always loved football anyways,” she said.

They have three daughters: Alexis, Ali and Nicolette, who each take dance lessons in Boardman. They have all been a part of football since they were less than a year old.

“Luckily, they all love it,” Angela Cochran said. “But he never misses the girls’ competitions or performances.”

Nick Cochran said he once thought he wanted a boy, but he’s happy to have three healthy daughters.

“It’s almost the same thing as us playing football. Even though it’s dance, I’m still kind of intense with it,” he said. “If I don’t feel like they’re working hard enough, then I’ll put my two cents in.”

Angela Cochran said getting to know the team when he invites his players over for dinner is the most rewarding feeling.

“They come over, and he feeds them pizza and wings and gets them clothes if they can’t afford to go to homecoming dances,” she said. “Even though he’s tough on them, I can’t imagine any other coach treats them like that. I guess we were never meant to have boys, because these players are honestly like his kids.”