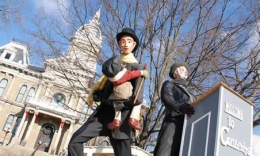 The Bob Cratchit and Tiny Tim statue is one of many focal points of the Dickens Victorian Village. Photo courtesy of dickensvictorianvillage.com

The imagination of Charles Dickens has come alive with life-size mannequins lining a five-block stretch of Cambridge, Ohio.

The 186 mannequins and 80 scenes depict images from Dickens’ “A Christmas Carol” and include characters like Tiny Tim.

Each figurine’s face was sculpted and painted by local artists, and the clothes were donated or found at thrift shops. High school students studying building at the local vocational school made each body.

Throughout the six years of the Dickens Victorian Village, the scenes have acquired new sculptures.

Visitors are able to explore historic architecture in the form of old-fashioned shops and restaurants, while also learning about England’s history.

Also on Nov. 10, the Great Expectations Chocolate Walk will allow visitors to explore the world of chocolate. However, tickets for this event are sold out.

An old-fashioned pub crawl — which includes a tour of four taverns and beverages like ale and wassail — will take place Nov. 12.

Last year, four contest winners were chosen to have their faces sculpted and placed in the scenes.

Jonett Haberfield, committee co-chair for the Dickens Victorian Village, noticed a steady boost in economic development for the businesses as the project matured.

“The whole display has grown, but what has really grown is the number of visitors,” Haberfield said. “It’s very rewarding to see what it has done for our town economically.”

Recently, the town has undergone a major renovation to its downtown area. New street signs and lampposts have been added throughout the area.

Founder Bob Ley envisioned the project after seeing the amount of tourists during a trip to Oglebay Park in Wheeling, W.V.

Ley originated sketches of each scene, proposed the idea to 17 people on a city board and received the approval of 16. The mayor started the project with $1,000, and a committee was formed.

From adolescent to elderly, the participation rate in the development has been lofty.

“People take pride in it, and it has been a fantastic thing for the city,” Ley said. “There are so many different ways that this affects people.”

As a participant, Haberfield finds the whole experience exceptionally stimulating and is impressed with Ley’s efforts.

“He wanted to revitalize and give people a reason to come to our town,” Haberfield said. “It’s very inspirational. All of us are volunteers, and it’s brought so many people together.”

Ley said the event has brought together community members.

“We see hundreds of families coming downtown to look at it together,” Ley said. “It’s just unbelievable to me how many people come.”

Ley recalled a time when he saw about 10 children wrapped in blankets sitting in the bed of a truck. The family traveled to see the display.

The objective of the project, which is displayed until Jan. 7, is to bring the Christmas spirit to its visitors.

“Everybody understands Christmas and wants to feel that warm feeling,” Haberfield said. “Being a part of this allows you to feel that.”