At the Watson and Tressel Training Site during spring practice on Saturday, a familiar face to the Youngstown State University football squad graced the turf, helping a player run through drills. It was Kyle Sirl. 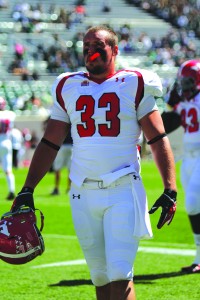 The former YSU defensive end stopped by after practice and indulged The Jambar with what he’s been doing as of late. As a senior last year, Sirl recorded 47 tackles and four sacks as well as participating in all 12 games.

Since that horrific South Dakota State University game ended, what have you been doing?

I’ve been working at Lyden Oil [Company]. I do a lot of paperwork and numbers, ship out oil and deliver. [I’m] trying to keep somewhat of a workout routine in my life and staying as close to the program as possible.

You mentioned earlier that you may want to get into the coaching game a little bit, whether it’s strength and conditioning or anything like that. What have you been doing to see if coaching might be in your future?

That’s something that I just recently put together. I talked about it with Paul Lyden and Coach [Eric] Wolford, and they’re on board to help me figure out what I want to do. Right now, I’m not in a position to just drop everything and pursue a career in coaching. I’m able to go to work. With spring ball being so close to where I work, I can come here, help with the linebackers, stay close, go to the early 6 a.m. conditioning and just kind of keep both parts in my life right now.

I don’t know if you had the time to reflect yet, but looking back on it, what was your favorite part of playing? What do you miss the most?

I definitely miss the camaraderie and being with my teammates, having them count on me and me counting on them, making a big play, having everyone jump up and down and cheer you on, them patting you on your back and getting ready to do it again. That’s what I miss the most.

Do you have a favorite game that you played in, whether it’d be Pittsburgh or another one?

I’ve definitely been in a lot of games here. It’s hard to say which one is my favorite to be a part of. I would like to say when we beat NDSU [North Dakota State University] when NDSU was No. 1, but I didn’t really play in that game. I had a few good games this season. It’s kind of hard to say which game is my favorite. Maybe when we played Albany last season because that was kind of when I set my mark and said ‘I’m a player here. I’m ready to step up for my team.’

If you don’t mind saying it on the record, how much bigger of a celebrity are you since the ‘Bison Trash’ commercial?

The ‘Bison Trash’ commercial, I kind of got the repercussions. When we made it, I didn’t think it was going to go that way. When you look back on it, it was just something fun, young and dumb. I mean, it’s just all having fun with what you do. I don’t disrespect those guys one bit. Those guys, obviously, hold the down for our conference. They are truly respectable people, and I’ve heard nothing but good things from kids from NDSU, so I don’t have any ill will against them.