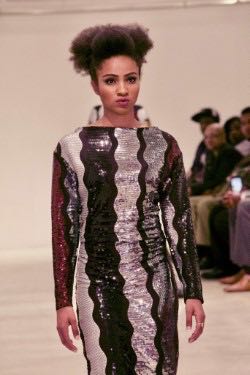 She is also the vice president of her father’s company, Ronson Originals Pictures and Videos. India McDowell said since her father, a YSU alumni, has always been a photographer, she’s been in the industry since she was five.

“I’ve been a professional model signed with the Talent Group in Cleveland for five years,” she said. “On Sept. 8, I got to model in the center of Times Square.”

India McDowell said she modeled for three designers in two shows during fashion week in New York. She said it was amazing because she had been waiting for that day for quite some time.

“Back in 2015, I had my first encounter with New York as far as the modeling industry,” she said. “You just get to showcase your talent and the gift God gave you.”

India McDowell said trying to keep up with the standard can be challenging and stressful in the modeling industry. She said although it can be very harsh as far as height, looks and even race, she enjoys being expressive.

“The modeling industry gave me an outlet to have a reason to express myself,” she said. “Have a strong head for being able to take rejection well, being able to be confident in who you are and do what you do well.”

India McDowell said the advice she would give to anyone interested in getting into the industry is to never give up. She said those who are interested will get a lot of nos, but it’s not the nos they’re looking for. It’s the yes.

“I’ve been doing this ever since I was little,” she said. “I’m 21 years old now. I just made it to New York Fashion Week, which is like the mecca of the United States for fashion. Definitely don’t give up.”

India McDowell said with modeling, she enjoys the connections she’s making and the exposure she’s getting.

Ronson McDowell, CEO and president of Ronson Originals Pictures and Videos and father of India McDowell, said he serves as his daughter’s manager. He said he’s been working with her since she was two.

“When she graduated from high school, she said she wanted to pursue her career in the arts,” he said. “I helped her build her music studio here in our home.”

Ronson McDowell said his daughter has been in a lot of fashion shows. He said India McDowell has modeled for Macy’s at the Southern Park Mall several times and also modeled for the Pillars Fashion Show at Stambaugh Auditorium.

“I was really ecstatic and elated that she had the opportunity to be in New York Fashion Week,” he said. “[Being] able to take pictures of her in the fashion show was really special.”

Ronson McDowell said there is no end to what India McDowell can do. He said ever since she was a baby, she was always very talented.

Rebecca Banks, a graduate student at YSU and avid fan of India McDowell, said she met her several years ago. She said after India McDowell came on her show with her dad at Rookery Radio, she was blown away.

“They are very well-rounded, interesting, cultured, educated people,” Banks said. “They want to help everybody. They work so well together.”