With the Youngstown State University men’s basketball team going through a grueling summer and fall of practice, it saw its first live action. YSU faced off against Division III Thiel College in Hurricane Relief Exhibition Game. YSU won the game 106-74.

“We take away that today was a confidence booster. We’ve been waiting six months to play somebody other than ourselves,” YSU forward Naz Bohannon said. “We were so happy for this moment. Coach wanted us to go and pounce.”

Bohannon shined in his first collegiate action with 13 points, 11 rebounds and seven assists in just 16 minutes of play.

Bohannon also said that when he got the call from Coach Jerrod Calhoun in April, he was excited because he loved the style of play.

For YSU, it was all about getting turnovers and getting out on runs in the open floor. YSU did that well in the first half leading 57-30. YSU caused 19 turnovers and scored 22 points off those turnovers. 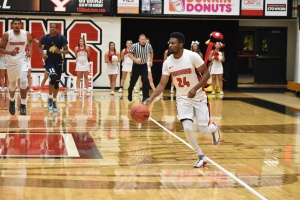 “We didn’t know what to expect, to be honest with you. Everybody keeps asking me about my team. It’s early,” YSU coach Jerrod Calhoun said. “It’s college basketball but I thought tonight that everybody won. We got to raise some money for the hurricane victims of Puerto Rico. That, to me, is awesome. It goes to whatever charity that we chose to help people.”

Calhoun said that he believes the other win was seeing how his guys will play together.

One of YSU’s biggest problems came with free throws and fouls. YSU shot just 10/18 from the line and fouled 15 times in the half.

“It was really good for us because we 11 guys that have never played before. You knew it was gonna be sloppy and it certainly was,” Calhoun said. “Tyree Robinson not playing obviously hurts. He’s gonna be a post player that’s gonna be really good for us. We need him on the inside blocking shots and anchoring our defense.”

Calhoun also said that he could tell that the team enjoyed playing with each other. His goal is to never stop getting better each and every day with this team.

In the second half, it was more of the same for the Penguins. YSU’s press style is very unlike most teams and that flustered Thiel quite a bit.

“It was pretty interesting today. It was our first game plus it’s a good cause for the people down in Houston, Puerto Rico and all around the world,” YSU Guard Cameron Morse said. “I feel like this was a good cause and our team was ready since we didn’t know what to expect. We are all trying to figure each other out. This is a good way to start the year off.”

Morse also said that because of the style of play, it will help everyone plus himself get easier shots.

Morse did his usual with 10 points and three assists in 14 minutes of play.

“Even if the other team does score, we are still pushing it down their throat and we are still trying to get easy buckets,” Morse said. “I feel like this style is going to help me down the road as well.”

YSU now has another scrimmage before its first game against Kent State University at the University of Akron.