“We’ve gone out and we’ve invested — with the support of our benefactor — a significant amount of resources to bring an internationally recognized scholar to the faculty,” the provost said. 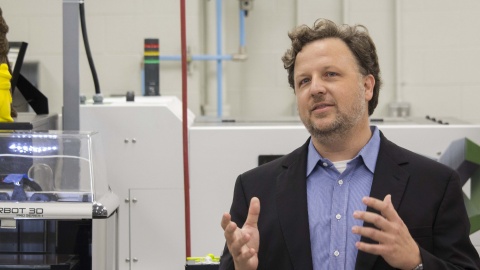 MacDonald was named the first Morris and Phyllis Friedman Chair in Engineering at Youngstown State University today. The Friedmans established the position with a $2.5 million donation to YSU last year.

MacDonald comes from the University of Texas at El Paso, where he was the Texas Instruments Endowed Professor and associate director of the W.M. Keck Center for 3-D Innovation. His research has received nearly $16 million in funding, according to a press release.

“I’ve got a deep admiration for the manufacturing heritage of this region,” MacDonald said. “And I really want to contribute to the next era.”

Brett Conner, director of advanced manufacturing workforce initiatives, led the search for the Friedman chair. He said they did a wide search, and MacDonald was the best candidate by far.

“He’s got a breadth of knowledge, [and he’s] well known within the additive manufacturing community,” Conner said.

Abraham said there aren’t a whole lot of people out there that have a background like MacDonald’s in both research and teaching.

“When Eric presented and indicated he would be interested, we really jumped on that,” Abraham said.

He said this is another indicator that YSU is leading the nation in additive manufacturing education and research.

“The work we’ve done has really led us to be able to recruit a scholar of Eric’s stature,” Abraham said.

Both Abraham and YSU President Jim Tressel praised Morris Friedman for coming to the country as an immigrant in the ‘30s — traveling over on his own and building a successful steel business through hard work. Tressel said this led directly to YSU bringing on MacDonald.

“If you think about today,” Tressel said. “It’s in large part due to Morrie Friedman coming over here at age 14.”