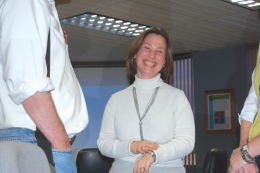 In her presentation, Paxhia presented data, revealing that actuarial positions are ranked as the third-best profession this year. Last year, the profession was rated number one.

The Association for Women in Mathematics and the Actuarial Science Club invited Paxhia to speak because the job is generally unknown.

“The actuarial profession is something you won’t usually hear about until you hit college,” Paxhia said. “So educating students is very important because it can help them choose their major and profession.”

Paxhia said actuaries make sure the company they work for has enough money at all times, but it’s not always cut and paste.

The American Academy of Actuaries defines an actuary as someone who “put[s] a price tag on risk.” They are mathematical experts that use their statistical knowledge to solve a variety of business problems.

“If you’re an actuary, you’re always wrong,” she said. “Your goal is to be as close to right as possible.”

Paxhia informed the students of what corporations look for when they are hiring prospective employees and stressed the importance of taking actuarial exams in order to stand out among applicants.

“There are very subtle differences between the candidates,” Paxhia said. “There are very, very smart people out there and lot of people who know how to do this job. What we want is someone who can communicate with people who aren’t actuaries about what we do.”

Angela Spalsbury, associate professor of mathematics, worked in conjunction with the student organizations to invite Paxhia to YSU.

“We have a lot of students who are interested in being actuaries, so we felt that it was important to have an actuary come here,” Spalsbury said.

The Association for Women in Mathematics felt that Paxhia’s visit was important to show the place of women in the mathematical field.

“When students get to see a successful mathematician who is a working woman at the top of her game, it’s very important,” Spalsbury said. “The students need that kind of role model.”

Paxhia said it is uncommon for women to be in the mathematical field and that they are often confused with secretaries.

“For women in mathematics, get used to it,” she said. “You’ll probably be the only one in the room. It’s a very male-dominated field, but it’s a great job for women, too, because very few people can really do the job.”

Adriel Hepburn, president of the Actuarial Science Club, said the actuarial profession is not something you can “half-step your way into.”

Hepburn took an actuarial test on Tuesday and passed.

“I was relieved because I’ve failed before,” he said. “I feel kind of motivated because now I’m looking at other tests to see how to study for them.”

Paxhia reminded students how difficult an actuarial position is but told them to not get discouraged. She said the most important part is to remain happy with your career choice.