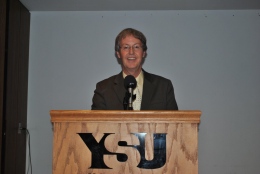 Stephen Gage, professor of music at Youngstown State University, gave an impassioned speech Wednesday afternoon entitled “Music and Words to Live By,” in conjunction with the Last Lecture Series hosted by the Student Government Association.

The Last Lecture Series is based on the principle that a faculty member is invited to examine what is most important to him or her and give a hypothetical last speech with the hope of imparting their personal wisdom to the world if given one final chance.

The concept began in 2007 when Randy Pausch, a professor of computer science at Carnegie Mellon University, was diagnosed with terminal pancreatic cancer and given a prognosis of three to six months.

Pausch gave an upbeat lecture to CMU students titled “The Last Lecture: Really Achieving Your Childhood Dreams,” which became a popular YouTube video that led to other media attention.

He went on to co-author a book called “The Last Lecture” that became a New York Times bestseller just before his death in 2008.

“When I was first asked to do this, I had no idea what the Last Lecture Series even was,” Gage said. “For the last few weeks people have been constantly congratulating me on my impending retirement, and I’m not even retiring.”

But as he researched what was involved in this project, and the impetus behind it, he began to feel connected to Randy Pausch in a way that allowed him to appreciate Pausch’s point of view.

“I hadn’t really spent much time thinking about dying,” Gage said. “But in 2005 I had an aortic aneurysm and required surgery.”

Gage also lost his mother and two of his close friends to the same form of cancer that eventually killed Randy Pausch.

“I think I can appreciate Randy’s perspective,” Gage said.

Gage’s lecture focused on the words of wisdom he would choose to share with the world, and especially his family, if he were given one final chance to do so.

“I’m not a speaker, and if you asked my wife you’d know what a daunting task this was for me,” Gage said.

Gage chose to make simple and straightforward quotes the lynchpin of his lecture.

“Short and meaningful quips are far better and easier to understand than long soliloquies,” he said.

Gage quoted Plato, Aristotle, Ghandi, Leonard Bernstein and Randy Pausch among others during his hour-long lecture, but he also added many of his own wisdom acquired over the course of his life.

“The best advice I got when I first came here was ‘leave the university a better place than you found it,'” Gage said. “Four or five years can be a long time. Find somewhere to make your mark. Find your niche; it’s going to be ok.”

“I love my job,” Gage said. “I love it more every day. Choosing to be a teacher was the easiest decision of my life. I always tell my students ‘care enough to share what you know.'”

The second half of Gage’s lecture dealt with his passionate love of music and how it has affected his life.

“The only music I dislike is music done without sincerity,” Gage said. “I recently went to Nashville, and I expected to hate it. I didn’t. I absolutely loved it. What a fabulous group of people and musicians. That’s why I love music, because it’s human.”

The Fifth Avenue Brass Quintet provided the music for Gage’s lecture, performing selections from Bach and Anthony DiLorenzo’s “Firedance.” The quintet was made up of Rick Moose and J.T. Goss on trumpet, Kaitlin Billock on horn, Morgan Wynn on trombone and D.J. De Panicis on tuba.

Gage has served as the Director of Bands at YSU since 1993, and in 2008 he served as the principal conductor of the YSU/Dana Symphony Orchestra.

In addition to conducting, Gage has also performed with the Erie Philharmonic Orchestra, the Youngstown Symphony Orchestra and the Jimmy Dorsey Jazz Orchestra.

He has also authored numerous works on conducting and rehearsal techniques, which have received critical acclaim.

Gage received his bachelor’s degree and performer’s certificate at the State University of New York at Fredonia, his master’s degree from the Eastman School of Music and earned his doctorate at the University of Illinois, Urbana-Champaign.

Prior to his career at YSU, he served as the director of bands at Auburn High School in New York.

Justin McIntyre, executive vice president for SGA, introduced Gage’s lecture and said he was pleased with the turn out.

“I’m happy to see so many people here, McIntyre said. “I hope we are able to continue this series even after my term ends. We’ll be looking for another speaker for the upcoming spring semester.”