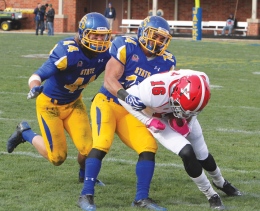 “It’s Halloween, and I’m dressed up as a coach,” Wolford said. “If someone asks what I’m going as for Halloween, [it’s] a ball coach.”

You didn’t get a chance to buy a real costume, Coach Wolford?

“I’ll just take being a coach right now,” he responded.

Safe to say, Wolford understands the reality of the situation: Win or face the consequences.

Now in his third season as YSU’s head football coach, Wolford holds an overall record of 13-17. In terms of winning percentage, Wolford ranks last in the history of YSU’s football coaches at .433, but his attitude at the conference was not one of surrender.

“Failing is something that is not acceptable,” he said.

Much of the damage to Wolford’s record has been done in the Missouri Valley Football Conference. Off to a 1-4 MVFC record this season, YSU is only 6-15 (.285) in the conference under Wolford’s guidance.

And while Wolford joked about the situation with Halloween, he still managed to tiptoe around his failed tenure thus far.

“I think there are two approaches you can take,” he said. “You can try to go a quick-fix route and turn your eye to discipline issues … or you can set a very high standard to doing things right. We took the no-nonsense approach.”

With a 4-0 start to the 2012 season, it looked as though the Penguins had the best of both worlds — a high-class program and a winning team — until a four-game losing streak derailed that perception.

Still, Wolford isn’t hiding from the consequences of cleaning up the football program.

“It maybe set some things back initially,” he admitted, “but it set a tone that there’s a certain way things need to be done.”

What needs to be done on the field for YSU is better ball protection. In the four October losses, the Penguins have committed 11 turnovers.

“The glaring thing has been turnovers,” Wolford said. “We’ve emphasized it, and we gotta get that corrected if we want to try to win a football game.”

The Penguins will get that opportunity at Stambaugh Stadium on Saturday against the University of South Dakota. The game will begin at 2:05 p.m.

Although the Coyotes are only 1-7 — including 0-5 in their first season in the MVFC — quarterback Kurt Hess addressed the turnovers as well.

“I just have to make a conscious effort of protecting the ball,” said Hess, who has thrown six interceptions in the past four games. “I have to definitely stress it during the week.”

Wolford said that if the turnovers aren’t reduced, there may be some changes made to the Penguins’ lineup.

“We’re not going to let guys continue to put us in bad situations,” Wolford said. “We’re at the final straw.”

YSU’s playoff hopes are also at the final straw. While the Penguins are technically still in the playoff picture, another loss would be devastating to their chances.

“It’s going to be big for our football team to go out and fight one week at a time,” Hess said. “We have to go out and not try do to much this week and not even think about the playoffs.”